Did Rahul Gandhi called Sushant as a cricketer .. NOT that is fake story done by vested interests  .. This is not the first time  that a fake tweet purportedly made by Gandhi made viral by RSS followers .

A few days back, a screenshot of a tweet from his official handle went viral that said, “Schools and colleges should reopen from 1st June on odd/even basis. Odd days teachers will come and even days, students will come.”
[splco_spacer] 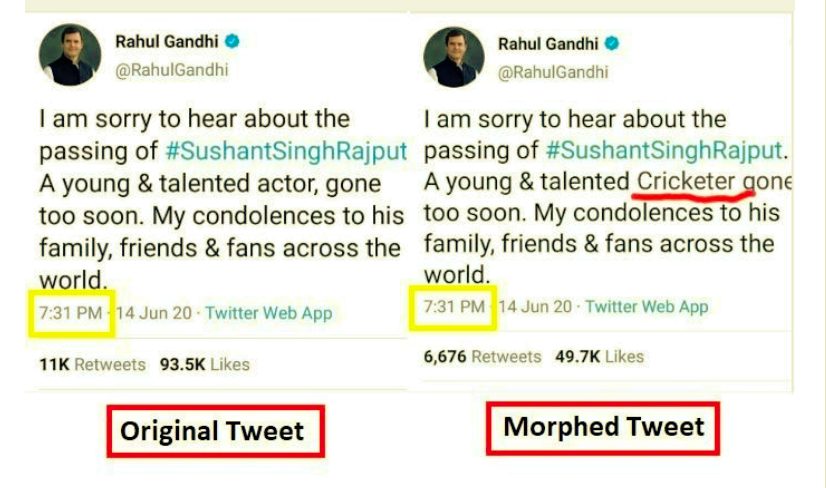 [splco_spacer]
It was found that the Congress leader never made that tweet.
So it is once again confirmed that  fake ids hiding inside Hindu gods picture as Display  and some prominent celebrity persons as fan clubs as profile  reportedly engaged  by RSS followers making such fake photoshops tweet where Gandhi is seen referring to Rajput as a cricketer and not an actor.
[splco_spacer]

Share via According to an eyewitness, Khalid and some others were standing at a nearby tea stall when the man approached him, pushed him and opened fire with a pistol. However, the bullet missed as Khalid slipped. Ashish Pandey, who works at an office nearby, said he saw the suspect approach Khalid while he and Read More…

Share via A Magistrate Court in Bandra has ordered an FIR to be registered against actor Kangana Ranaut and her sister Rangoli Chandel for “trying to create hatred and communal tension between Hindus and Muslims” through their tweets.   Magistrate Jaydeo Ghule passed the order on a complaint by casting director and fitness trainer Munnawarali Read More…

Share via On the day when UP CM Yogi Adityanath celebrated his birthday June 5th , On the day when Indian Prime Minster Modi has stated people are not dying because of hunger.. In uttar pradesh a family of five people reportedly committed suicide in Barabanki due to Financial crisis  ..   Congress general secretary Read More…