Skip to content
The Peninsular Rivers Development Component of the National
Perspective Plan (NPP) for Water Resources Development, formulated in the year 1980 by the erstwhile Union Ministry of Irrigation (now Ministry of Water Resources) and Central Water Commission,
Then envisaged diversion of surplus flows of the Mahanadi basin and the Godavari basin to the water short Krishna, Pennar, Cauvery, Vaigai and Gundar basins in the South.
Conceived by previous governments in tamil nadu the project was however taken shape and  announced in the 2013-14 budget by the then Tamilnadu  Chief Minister  Jayalalithaa.
The project taken final shape only  after Tamilnadu government waited for Central funds for a long time and then only then CM  Jayalalithaa announced in 2014 that the state government itself would allocate Rs 250 crores for the scheme.
Previous ADMK government Chief Minister  Palaniswami again  during 2017  has announced that the inter-state river link project of diverting excess water from Thenpennai river in Krishnagiri district to Palar in Vellore district would be implemented soon.
He said that the Central government had given its nod for the `66-crore project and the State government would go ahead with the project soon, amidst cheer from the audience while addressing a large gathering of party cadre and the general public at the MGR centenary celebrations held here at the Fort Grounds on 9 Sept 2017 .
During august 22 2018 interacting with reporters To a question on Cauvery water being released into the sea, PMK leader Ramadoss said that 158.33 tmc of water is released into the sea as the state uses only 40 tmc.
“As the state government is more bothered about sand quarrying, this was the only natural that they do this as the government’s water management is very poor,” he added.
In the same vein he added if Mettur Dam was desilted another 10 tmc can be saved.
Construction of 10 check dams/barrages on the Cauvery and Coleroon will save another 60 tmc of water.
Adding to this, if the height of Mettur Dam is raised by 10 meters it will enable additional storage of 27 tmc, he said.
However, then 2 CMs of admk didn’t  full fill their declared  promises  but 6 years after the announcement, still admk government did not take up the work
Besides benefiting farmers in Kanchipuram district, the project would augment ground water table in Palar which provides drinking water for Kanchipuram as well as the southern suburbs of Chennai. Even during the driest of summers, water is taken from the Palar bed to supplied to both the districts.
The scheme involves the digging of a feeder canal for 38 kilometre from Then Pennai to Cheyyar river which joins Palar at Thirumukkudal. The scheme would lead to water flow in Cheyyar besides Palar. 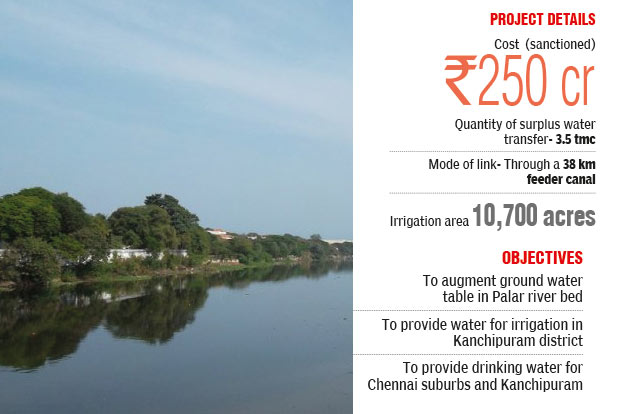 The river Palar was providing drinking water to the areas of Alandur, Pammal and Anakaputhur earlier, but these areas had been delinked recently and connected to metro water network.
At present,Palar supplies 125 lakh litres of water to TWAD board which provides water to Tambaram and Pallavaram municipalities besides Chitalapakkam and Tiruneermalai town panchayats, St Thomas Mount cum Pallavaram Cantonment board.
It also covers the Indian Air Force station at Tambaram, Officers Training Academy at St Thomas Mount, Arignar Anna Zoological Park at Vandalur and Madras Export Processing Zone.
The water flow in Palar river had been reduced to after the construction of dams across the river by Karnataka.
Besides, Andhra government too is trying to build check dams across the river. 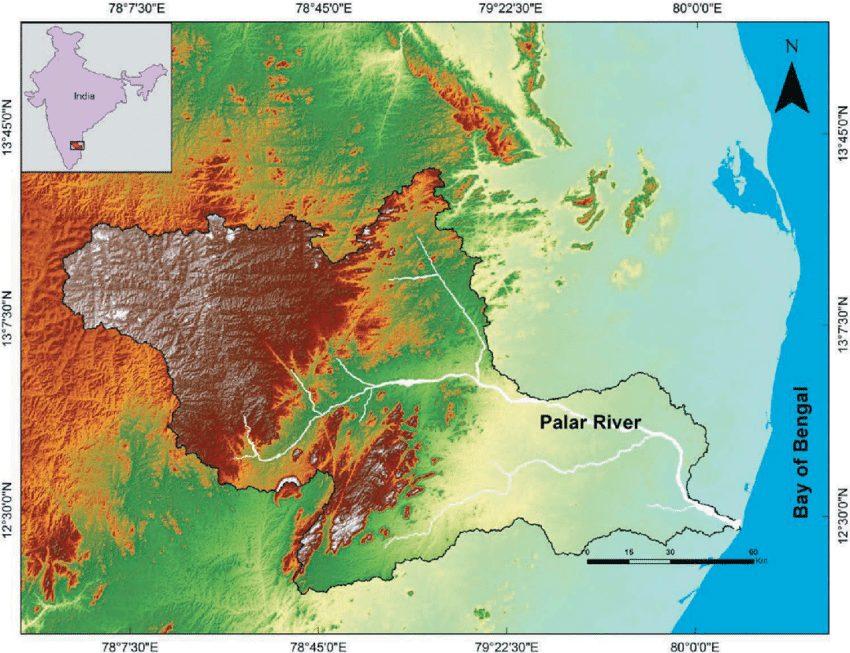 Besides, indiscriminate sand quarrying in the Palar bed had also brought down the water table in the river bed drastically.
The river’s aquifers would get recharged if the Pennari-Palar link project is completed.
Commenting on the delay, a PWD official said the Centre had passed a new land acquisition act which had increased the cost of compensation for the land owners when government takes up land for projects.
Due to the increased compensation, the state government is revising the scheme estimates and working out the details of the project.
Reviewing the six years delay and after  current DMK government that took over office on 7 May 2021 Water Resources Minister Duraimurugan on Monday said  Palar would have continuous flow for three months once the proposed Palar-Thenpennai river linking scheme was completed, said
Participating in a function to hand over government largesse based on petitions given by public during the “Stalin in your constituency” programme undertaken by the Chief Minister during his poll campaign, the Minister said the river linking work would begin soon by diverting excess water from the Thenpennai near Bargur in Krishnagiri district.
After handing over benefits worth Rs 6.17 crore to 484 beneficiaries from the district, he said that of the total of 8,038 petitions received in Vellore district, 484 petitions have been attended to, while another 7,554 petitions were under consideration.
Those present on the occasion included Collector A Shanmuga Sundaram, DRO J Parthiban, Vellore MP DM Kathir Anand and MLAs, P Karthikeyan (Vellore), AP

Tamil Nadu Minister Sekar Babu who also Harbour Constituency MLA stated at an event that the North Indians were “economically empowered now because of the Dravidian parties,” yet, they continued to vote for BJP.   Babu, DMK MP Dayanidhi Maran and DMK MLA I Paranathaman were invited to inaugurate the Foodbank event organised by Mahavir Read More…

In April 2017, the security guard of the Kodanad estate, Jayalalithaa’s retreat home in the hilly district of the Nilgiris, was found dead.   It emerged during the probe that Jayalalithaa’s former driver C Kanagaraj and K V Sayan had allegedly plotted the crime.   A total of ten people had been arrested in the Read More…