Skip to content
Share via
Desiya Thennindiya Nadhigal Inaippu Sangam, state president P Ayyakannu, said during the state executive meeting was held in Tiruchy and at the meeting it was resolved against the Farm Bill claimed to be anti-farmer act and decided to stage a protest in New Delhi demanding to withdraw the Bill.
“The confederation of farmers associations has decided to hold a mega rally in New Delhi on November 26 and 27 in which around 25 lakh farmers from across the nation are expected to participate. 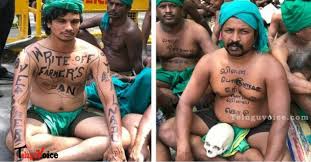 We the farmers from Tamil Nadu would tonsure our heads and participate in the rally half naked. So far 500 farmers from our association have volunteered to take part in such a novel protest,” Ayyakannu said.

Share via DMK President MK Stalin on Monday said when his party comes to power it will pass a law like the one passed by the Kerala government stipulating minimum support prices (MSP) for vegetables.   In a statement issued, Stalin pointing out the rising prices in vegetables soon after the passage of the three Read More…

Share via In the morning, Rajya Sabha Chairman M Venkaiah Naidu suspended eight MPs, minutes after the House reconvened. These lawmakers from Trinamool, the Congress, CPI-M and AAP were accused of creating ruckus in Parliament on Sunday.   The motion was moved by V Murlidharan, MoS for Parliamentary Affairs, following which the House suspended Derek Read More…

Share via In a major setback to Chinese government US Senate has passed a legislation that could ban Chinese companies from listing shares on American exchanges. In addition to this ban the new legislation may also ban Chinese companies from raising funds from American investors.   The bill, moved by Louisiana Republican Senator John Kennedy, Read More…