Skip to content
Share via
Bihar that is going to have assembly election in this year where current JDU Party run Nitish Kumar govt has asked contractors to change their Chienese partners before the cancellation of the contracts.
The contracts of two out of the four contractors who were selected for the construction of a new bridge parallel to Mahatma Gandhi Setu have been cancelled as they had Chinese partners, said Bihar Minister Nand Kishore Yadav.
.
“Seven contractors had applied out of which three were disqualified and out of the remaining four, two had Chinese companies as partners, so we asked them to change their partners but they couldn’t, so we cancelled their tender.
We have called for applications again on June 27, for which the last date is July 29,” said Nand Kishore Yadav.
“It is an important bridge, and if the participation of foreign countries increases, it can be harmful. This decision was made after a lot of thinking and that’s why we have retendered,” he added. 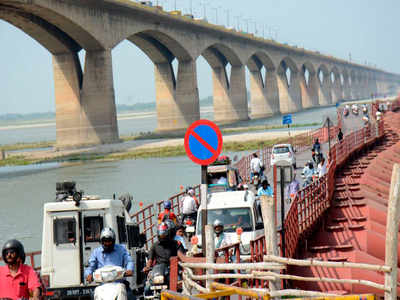 Mahatma Gandhi Setu (also called Gandhi Setu or Ganga Setu) is a bridge over the river Ganges in Bihar, India, connecting Patna in the south to Hajipur in the north.
In recent decades, Mahatma Gandhi Setu the bridge has experienced major traffic chaos due to traffic of 85,000 vehicles and also average 12,000 pedestrians crossing it, operating in excess of capacity and overloading the structure.
The Bihar government has planned to build two pontoon bridges parallel to it, in order to relieve these problems.
Its length is 5,750 metres and it is the third-longest river bridge in India. It was inaugurated in May 1982 in a ceremony in Hajipur by the then prime minister, Indira Gandhi.

Share via Earlier Tuesday in Patna, the Bihar chief minister who faced a barrage of questions on Kishor’s caustic attacks on the BJP and Home Minister Amit Shah, shot back that the former BJP president had played a key role in his induction into the JD (U).   “Do you know how he (Prashant Kishor) Read More…

Paswan’s LJP brought Cornered BJP to its knees in Bihar

Share via   The JD (U) and the BJP will contest on 17 Lok Sabha constituencies each. Quite a climbdown by the saffron camp as it had contested 30 out of 40 Lok Sabha seats in Bihar and won 22 during the 2014 parliamentary polls.   Days after Upendra Kushwaha quit the NDA, LJP president Read More…

Share via Probing Agency CBI in the Muzaffarpur shelter home case, on Friday told the Supreme Court that the names of 11 girls alleged to have been murdered by the prime accused and his accomplices had been ascertained and a “bundle of bones” recovered from a burial ground.     The CBI said the names of Read More…