Skip to content
The Union cabinet on Monday decided to cut 30 per cent salary of all MPs for one year and divert MPLADS funds for two years to fund the fight against the Covid-19 pandemic.
In a letter to Prime Minister Narendra Modi, Congress president Sonia Gandhi made various suggestions for fighting COVID-19 including imposing a “complete ban on media advertisements – television, print and online – by the government and Public Sectors Undertakings (PSUs) for a period of two years”.
The suggestions came after Modi reached out to several opposition leaders, including Sonia Gandhi, on Monday and sought suggestions from them in fighting the fast-spreading coronavirus, which has claimed at least 150 lives and infected over 5311 people in the country.

Gandhi said the central government currently spends Rs 1,250 crore per year on media advertisements, she said, adding that this will free up a substantial amount to alleviate the economic and social impacts of the virus outbreak.

She said an amount of Rs 393 crore was spent for just the Prime Minister and Union Cabinet members’ trips in the last five years and the amount can be utilised extensively in measures to combat Covid-19 .
There is no urgent or pressing requirement that cannot be postponed until this crisis is contained, she noted.
Gandhi said by reducing 30 per cent expenditure of the Centre, it will yield around Rs 2.5 trillion per year which can be allocated towards establishing an economic safety net for migrant workers, labourers, farmers, MSMEs and those in the unorganised sector. 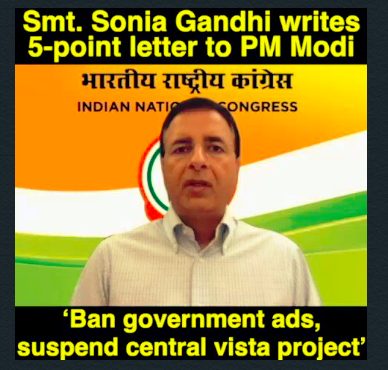 “Suspend the Rs 20,000 crore ‘Central Vista’ beautification and construction project forthwith. At a time like this, such an outlay seems self-indulgent to say the least. I am certain that Parliament can function comfortably within the existing historical buildings,” Gandhi told Modi.
The Congress president said this sum could instead be allocated towards constructing new hospital infrastructure and diagnostics along with equipping our frontline workers with Personal Protective Equipment (PPE) gears and facilities.
She also called for transferring all money under the ‘PM Cares’ fund to the ‘Prime Minister’s National Relief Fund’ to ensure efficiency, transparency and accountability.
These funds, plus the amount in PM-Cares can be utilised to ensure an immediate food security net for those at the very margins of society.
Gandhi said every Indian has made personal sacrifices to fight this disease, but “it is time that the Legislature and the Executive reciprocate this trust and good faith”.
On the 5 Point austere measures suggested by Sonia Gandhi but her sought 1,250 crore per year ban on media spending triggered News Broadcasters Association (NBA) .

News broadcasters Association president Rajat Sharma reacted angrily and  in a statement said . “ Strongly deplored that Sonia Gandhi’s suggestion of imposing a ban on media advertisements by the government and PSUs for two years, and saying the Congress president’s call was “highly demoralising” for media personnel.

Modji has stalled development work in Delhi, is that not sedition asks Arvind Kejriwal

Chief Minister Arvind Kejriwal, on Thursday, said that the Delhi government’s law department was examining granting sanction for prosecution of former JNUSU president Kanhaiya Kumar in the sedition case.   He, however, accused the Centre of committing “sedition” by creating hurdles in the works of Delhi government.   “I do not know whether Kanhaiya has Read More…

With the country hurtling towards Lok Sabha elections, Congress president Rahul Gandhi in a frontal attack on Prime Minister Narendra Modi challenged him to a “debate on national security and Rafale”. He said PM Modi “will run away” from debate.   “Narendra Modi is a coward, he will run away from debate,” Gandhi said at Read More…

Congress uproar made Home Minister’s Statement on the citizenship bill.

Home Minister Rajnath Singh on Wednesday told the Rajya Sabha that the Citizenship Amendment Bill is intended to pave way for Indian citizenship to the persecuted religious minorities from three countries.   He assured the government was committed to preserving the distinct culture and identtiy of the North East. The bill seeks to provide Indian Read More…