Skip to content
Ten days before the Indian Department of Telecom sent at least two messages everyday asking people to download the Aarogya Setu, app, which was developed under the guidance of National Informatics Centre through a public-private partnership.
Then came Indian Prime Minister Narendra Modi’s latest address to the nation, in which he not only extended the lockdown totalling to 40 days
But here Modi stressed the most was that Aarogya Setu, the COVID-19 contact tracing app, must be downloaded.
As on date that is after four  days of PM modi call  in Android GP the downloads seen a upward surge and reached up to 50millions but Apple IOS seen a low confine to just 4800 downloads
The government is claiming that this app would be at the forefront of the country’s fight against Coronavirus.
A comparison with similar mission apps with the one developed under public-private partnership app called Aarogya Setu gives a surprise
Unlike TraceTogether, the contact tracing app in Singapore, that asks only for the user’s number, the Aarogya Setu app asks for the names of the users, age, health details, profession and GPS location.
When these details are given, it provides an idea about the person’s religion, caste and social status. Why to ask for religion and caste critics ponder
When the GPS location is recoded, it gives away the address of person. The location is not required for contact tracing. All of this data is recorded on a central cloud server.

What the Aarogya Setu app does is that it uses Bluetooth to connect with those in close proximity, provided of course the Bluetooth function is switched on.
This helps the app trace those who the user has met, when and where they met. So, if a user of this app tests positive, the government will inform all the registered users of this app that the infected user met in the last 30 days.
However, the terms of the app states that even if there is any misinformation spread through the app, the Central government, who is the owner of the app, cannot be held responsible.

[splco_quote]This makes any skilled savvy user  to arrive at a conclusion  that Aarogya Setu is nothing but a surveillance app.[/splco_quote]

In the name of contact tracing, Aarogya Setu collects registration details, with user caste and religion and GPS locations, nearby device data and this can be used to identify your social graph.
But the alarming part of this Prime minster sponsored app is Aarogya Setu app collects too much information on registration and none of this data is required for contact tracing.
If Aarogya Setu was really meant only for contact tracing, they would have generated a random userid/cellid like Singapore did ,”
India has more than 1.3 billion people, and it is been reported 0.4 billion are smartphone users. With GP 5million and IOS 4800 downloads as on date that is 4 days even after Indian Prime Minister shree on Aarogya Setu means that this APP penetration in the country stands at approx a low 4%, which may include multiple devices for same people.
Statisticians would confirm with the current level of Sethu app penetration, will not do much help in contact tracing as we have reached the community-spreading stage of the virus,”
What is keen to imbibe is that even people in the initial development of the application have stated that at least 50 percent of the population must download the app for it to be an effective solution.
[splco_quote]Sidharth Deb in the paper ‘Privacy prescriptions for technology interventions on Covid-19 in India’ for Internet Freedom Foundation has impliedly asked ” Considering India does not have that many smartphones, would it mean the Sethu app promoted by Indian Prime Minister is already set up to fail?”[/splco_quote]
This leads to another interesting question, why is the government then pushing for this app. Indian government functionaries point towards the success of TraceTogether for pushing Aarogya Setu in the country.
However, it should be noted that Singapore PM had underlined that the ground network of hospitals and medical facilities had helped control the spread of the pandemic and not the app.
“In India, without having the underlying medical capacity of health professionals and hospitals, the app as a standalone solution is a mirage . 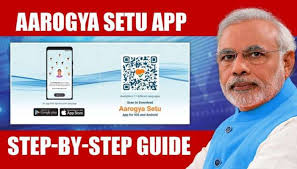 The committee for developing the app comprises TRAI chairperson RS Sharma,
India’s principal scientific Advisor K Vijay Raghavan, Ministry of Electronics and IT secretary Ajay Sawhney, Department of Telecom secretary Anshu Prakash,
Mahindra and Mahindra Chairperson Anand Mahindra,
Tata Sons chairperson N Chandrasekharan
National Security Advisory Board member V Kamakoti.
In addition This team will also receive assistance from the Prime Minister’s Office’s Deputy Secretary, Manharsinh Yadav.
What more alarming is committee which has been set up for devising a technology-based platform for Covid-19 has no member from the ministry of health and Family Welfare, or of any persons with a medical or epidemiological background.
This is a technology-first rather than a health-first focus towards addressing the pandemic. This is a classic instance of technology intervention being prioritised as the end in itself as opposed to it serving as a means for achieving the originally intended objectives of controlling the pandemic,” said Apar Gupta, the executive director of Internet Freedom Foundation.
Also Read : Congress & DMK Grilled BJP’s Poor Governance
Several experts state that the government can use the app for centralisation of data. Health is a concurrent subject, but collection of data is sorely in the hands of the state government just like how it was in case of the National Register of Citizens (NRC) data.
There are also reports to suggest that the government will extend the life of the App beyond Covid-19 contact tracing. Deb also warns in his paper that the Central Government has reportedly set up a committee to actively monitor data which is captured by the Aarogya Setu application.
Moreover, the government recently announced that people can apply for e-passes, which are required for movement during the lockdown, using the app.
This means that the function of the app has already been extended. This seems like a way for capturing more identity data to apply for these passes, and possibly the government has a hidden agenda to push Aadhaar along with it, violating proportionality principles of right to privacy,
What is also worrisome is the app’s invasion of privacy as its policy aims to confuse than clarify. Initially, it states that the personal information is stored on the device itself, but later it states that this data could be stored externally in a cloud server and be used by the central government.
The app does not specify which government officials or departments would have access to this data. The terms state that the Government is also allowed to share personal information with “other necessary and relevant persons”, for “necessary medical and administrative interventions”. Deb suggests that this points towards interdepartmental exchanges of people’s personal information.
Though the privacy policy of the app suggests that all user contact records will be deleted within 30 days, it alternatively also points towards data retention forever. “All contact-tracing apps need to have a post-epidemic retirement plan.
Aarogya Setu does not have one. In this case even if you uninstall the app, it does not mean personal data has been deleted from the server,” underscores Aravind.
The app states that people’s personal information may be lawfully used unless another law specifically states against it. “This clearly means that the government does not intend to destroy the data.
India does not have a data protection law so there is an absence of institutional framework to verify if the promises made under the privacy policy will be actually implemented,” claims law experts .
The code of the Aaroya Setu app is not open to anyone, so one more glaring factor adds to the opacity of the issue.
What this directly confirms is that source code of Aarogya Setu app as well as the absence of any government office enforcing protection, the users of this app are in a situation where the government is asking them to trust but not verify
According to the 2011 data, released recently, 24,821 people have registered Sanskrit as their mother tongue, in comparison to 14,135 people who had said Sanskrit was their mother tongue in 2001.
In addition naming this Setu in Sanskrit whereas Sanskrit language speaking India population is just 0.0012 % only and clandestinely  usage of privacy data , and trespassing in to State cause list that jeopardise  Federal structure of Indian Constitution and lack of Health care professionals in the app Committee   and add to it just 4% of penetration of Setu app amongst Indian people that defeat the very purpose of its mission .

[splco_quote]Now the final important question .. “does not all above said five factors  adds up and  points to a single question ..  the very purpose of this Modi promoted app Sethu is a hit or a flop “[/splco_quote]

SaVeRa
SaVeRa Has completed Applied Sciences in Thaigarajar Engineering College, Madurai and done PG Diploma in Foreign Trade and also obtained “Distinction“ in MBA from Madras university, Chennai. He Worked in UAE in International Trade for two years and then Started own business the age of 28... Due to genocide problem in Srilanka he resigned his treasurer post Indian Asean Srilanka Chamber of Commerce in 2009. He petitioned Sailesh Gandhi, Information Commissioner who is also grandson of Mahatma Gandhi and obtained the right to obtain Information from Central goverment under 8(1)(h) of RTI act. He has urge for writing and thanks to the advice from his friends founded splco.me a social media channel. He has interests in Aquarium, Organic Agriculture and reading.
https://www.splco.me

[splco_heading size=”15″ align=”left” margin=”30″] After conducting trail for 2 years  Gujarat HC had set aside Chudasama’s December 2017 election as void and illegal on the grounds of manipulation and malpractice. The BJP leader had been declared a winner over Congress candidate Ashwinbhai Rathod, by a margin of 327 votes. [/splco_heading]   When the candidate Ashwin Rathod Read More…

Ten days after India sealed the government-to-government agreement on the Rafale deal, Reliance Defence and Dassault had announced a joint venture (JV) in the aerospace sector and a year later, the foundation stone of a manufacturing facility was laid in Mihan, Nagpur.  The opposition parties  alleged that the Reliance Defence was formed just 12 days Read More…

Researchers in India detected genetic material of the SARS-CoV-2 virus in wastewater, a breakthrough that paves the way for using wastewater-based epidemiology (WBE) for real-time surveillance of COVID-19 in the country. The study, led by group of young scientists in IIT-Gandhinagar, found that increased gene copies of the virus in Ahmedabad’s wastewater matched the incidence Read More…

One Reply to “Modi promoted Sanskrit named Aarogya Setu app a hit or a flop ..”