Skip to content
On November 19, a government notification listed out specific surgical procedures that a postgraduate medical student of Ayurveda must be “practically trained to acquaint with, as well as to independently perform”.
The notification has invited sharp criticism from the Indian Medical Association, which questioned the competence of Ayurveda practitioners to carry out these procedures, and called the notification an attempt at “mixopathy”.
The IMA has planned nationwide protests on December 8 against this notification, and has threatened to withdraw all non-essential and non-Covid services on December 11.
Doctors’ protest intensifies as Modi govt allows Ayurvedic doctors to perform surgery .
Mixing medical sciences and Ayurvedic medicines is a great threat to patients and this will increase the burden on the students and health care system, Dr Simrran Karla said .
Mixing medical sciences and Ayurvedic medicines made 120 doctors protested in 5 different locations in Delhi on December 8 2020 . Each location Doctors ensured not more than 20 medicos participating in protest strike
During protest in exchange of words One of the protesting doctor was detained by Delhi police .
“The reason why only 20 doctors are there at each protest site is we did not want a large gathering as all the COVID norms have been followed.
We only want peaceful demonstrations to make people aware and warn the government.
We are against this Mixopathy and don’t want ‘Jack of all trades and masters of none’ culture in our profession, Dr Simrran Karla added.
Dr Priyanshu Ranjan, State president IMA MSN MP said, this notification by CCIM not only takes away the patient’s choice but also encourages anarchy.
Ayurveda practitioners say the latest notification just brings clarity to the skills that an Ayurveda practitioner possesses.
“The surgeries that have been mentioned in the notification are all that are already part of the Ayurveda course.
But there is little awareness about these. A patient is usually not clear whether an Ayurvedic practitioner has the necessary skill to perform one of these operations. 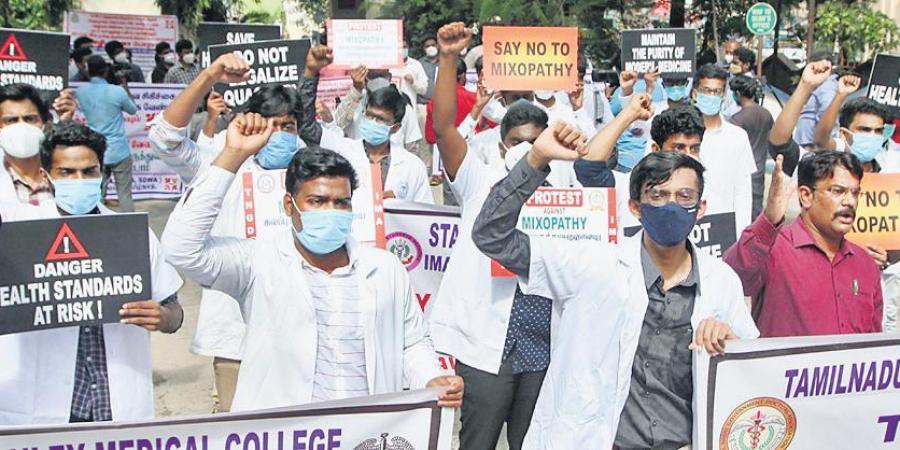 Now, they know exactly what an Ayurveda doctor is capable of. The skill sets have been defined.
This will remove question marks on the ability of an Ayurveda practitioner,” Hemantha Kumar of the Jaipur-based National Institute of Ayurveda said.
The notification mentions 58 surgical procedures that postgraduate students must train themselves in, and acquire skills to perform independently. These include procedures in general surgery, urology, surgical gastroenterology, and ophthalmology.
The fact that Ayurveda institutions prescribe textbooks from modern medicine, or that they carry out surgeries with the help of practitioners of modern medicine, is not reason enough to allow this encroachment, said K M Abul Hasan, chairman of the IMA Junior Doctors’ Network.

A statement from the IMA said it condemned the “predatory poaching on modern medicine and its surgical disciplines” by CCIM (Central Council of Indian Medicine, which functions under the Ministry of Ayush). “This is another step to legitimise mixopathy,” it said.
Avinash Bhondwe, president of the Maharashtra chapter of IMA, said the CCIM had claimed that all these modern surgeries are actually Ayurvedic procedures, and have Sanskrit names.
“All the common procedures in all the surgical specialities have been included in the notification. They have notified these as Ayurveda procedures. They should also explain, with proof, how each of these procedures mentioned in Ayurveda literature is equivalent to the modern surgical procedures,” Bhondwe said.

Taking a angry view of abusive behaviour towards healthcare professionals amid the nationwide lockdown, the Indian Medical Association (IMA) has called for observance of a ‘White Day’ on Wednesday and a nationwide ‘Black Day’ protest on Thursday.   IMA said that it had so far observed the utmost restraint and patience in spite of extreme Read More…