Skip to content
Central teams to investigate lapses in controlling the coronavirus disease and allegations of coronavirus lockdown violations will be sent to three more states, the government said today after it faced  a bitter row with West Bengal.
The three states new states are Gujarat, Telangana and Tamil Nadu.
Following Mamata Strong word letter to Indian Prime Mister modi , Modi led BJP government in Centre has cut a sorry face for not concentrating the top ranking Indian states viz Maharastra , Delhi and Gujarat .
In West Bengal, central teams were allowed to visit the containment zones after a warning by Union home secretary Ajay Bhalla. The teams had complained to the home ministry that local administration was not cooperating with them.
The Trinamool Congress had accused the Centre of targeting states ruled by opposition parties, asking “why no teams were sent to Uttar Pradesh or Gujarat”.
Congress leader Ahmed Patel had said a Central team should also be sent to Gujarat and the exercise should not be limited to select states.
[splco_spacer] 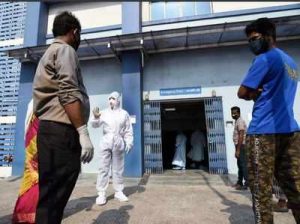 The government said the Inter-Ministerial Central Teams (IMCT) will focus be on a range of issues, including compliance and implementation of lockdown measures as per revised consolidated guidelines, preparedness of health infrastructure, safety of health professionals and conditions of relief camps for labour and poor people.
The IMCTs will be headed by additional secretary rank officers and comprise public health and disaster management specialists.
Earlier this week, the centre had sent six IMCTs – two each to Maharashtra and West Bengal, and one each to Rajasthan and Madhya Pradesh.
The Mumbai-Pune central team has been asked to expand its inspection activity to Thane district in Maharashtra as well.
Sharing the feedback of the IMCTs sent to Mumbai and Indore this week, MHA official Punya Salila Srivastava said “Indore team has reported that there are 171 containment zones in the city, of which 20 are very critical”.
The official added that the team visited the hotspots and they had a detailed discussion with teams involved in contact tracing etc.
The team found that there were adequate testing kits, PPEs, masks and other safety equipment available. Lockdown is being followed properly and safety of Health infrastructure and safety of healthcare workers is being ensured,” Srivastava added.
She said that the Indore team also interacted with farmers, disabled, traders, NGOs, medical colleges, migrant labourers in camps, among other stakeholders. The Indore team, Srivastava added, found that government has provided a facility whereby farmers are able to sell their produce at MSP without going to mandis, thereby decongesting them.
The Mumbai IMCT went to slums of Dharavi and suggested installation of portable toilets there to augment the number of community toilets as slum-dwellers have to come out to use very few community toilets.
Srivastava said that Mumbai team has also suggested to arrange for institutional quarantine for 2,000 – 3,000 people; to increase testing capacity and increase strength of surveillance teams using volunteers. The team also deliberated upon provision of medical facilities for non-Covid patients.
.
Splco Reporter
Special Correspondent Group of right thinking writers who eulogise self expression in quest of truth in news making jointly contribute under the platform of splco.me a novel social media channel.

In BJP party led UttarPradesh a BJP lawmaker has written a letter to Chief Development Officer (CDO) of Hardoi to return his contribution of ₹25 lakh from the Vidhayak Nidhi (Legislators’ funds) which he had donated for the purchase of masks, PPE, santizers and other equipments, alleging corruption in purchase of these equipments.   Alleging Read More…

RJD’s Tejashwi Yadav will be the chief ministerial candidate of the Opposition Grand Alliance in Bihar as it announced a seat-sharing formula on Saturday for the upcoming Assembly polls under which his party will contest 144 of a total 243 seats.   At a press conference here, 30-year-old Yadav, son of Rashtriya Janata Dal(RJD) supremo Read More…