Skip to content
Bajrang Dal activist Gunman sent to 14 days protective custody by Delhi court.
After the arrest of a 17-year old minor shooter by the Delhi police for firing at anti-Citizenship Amendment act protestors at Delhi’s Jamia area on Thursday, a Delhi court on Friday sent the accused to 14 days custody.
Students of Jamia were taking out a march from the university to Mahatma Gandhi’s memorial at Raj Ghat on the occasion of Martyrs Day on Thursday when an armed gunman by the name of Ram Bhagat Gopal Sharma open fired on the protestors resulting in the injury of one person.
The student who got injured from the resultant bullet wound has been identified as 25-year-old Shadaab Farukh. After being shot in the hand, Farukh was taken to the Trauma Centre at the All India Institute of Medical Sciences (AIIMS).

According to eyewitnesses, the gunman yelled “Aao tumhein deta hun aazadi (Come, I’ll give you freedom).”Before opening fire, he shouted, “I am a Lord Ram devotee.”

However, the person who fired the gun has been identified as a 17-year-old resident of Jewar in Greater Noida. Although the law of the land prevents the individual from being named, it can be said as  the man went by the moniker ‘Rambhakt Gopal’ on Facebook.
Now, even though the profile has been deactivated, what remains especially remarkable is that moments before the juvenile pulled the trigger of his pistol in Jamia, reports indicate that he had gone live on Facebook.

This comes a few days after Union minister Anurag Thakur had led slogans of ‘goli maaro s**** ko’ at a Delhi rally. BJP leaders have criticised the ongoing protests at Shaheen Bagh and Jamia Millia against the Citizenship Amendment Act and the proposed National Register of Citizens (NRC).

Social blog circles busy with Queries that How did the CBSE marksheet of the ‘teenaged terrorist’ , who brandished a country-made pistol and fired a shot at Jamia on Thursday, find its way to the news agency ANI within hours of the incident? 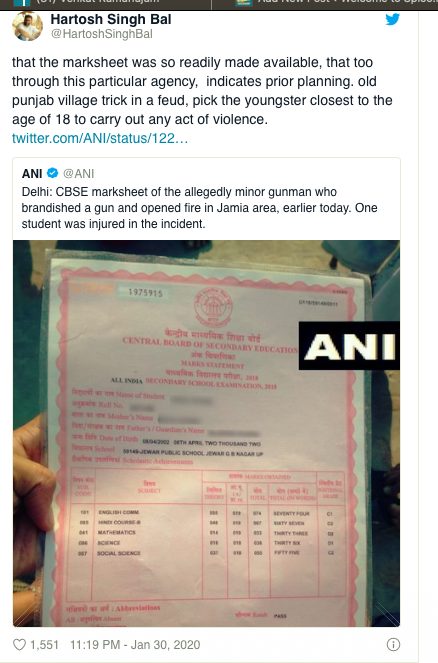 The news agency was quick to tweet the marksheet, evidently in an attempt to show that the shooter was a minor. By then the media had identified him by name, accessed his Facebook Page, found out his links to the rabid Bajrang Dal. It was also reported that he was live streaming before opening fire and injuring a student.
Was the terrorist carrying the marksheet with him? Why would he do so in the first place? While the news agency has not clarified how it got access to the marksheet, the inference is that the agency caught hold of the image from Delhi Police. So, the next question is how did the police get it?
Video clips circulating of the incident have added to the suspicion that it was a set-up. The swagger with which the teenaged terrorist walks back towards the policemen indicates as much. Contrary to a Delhi Police spokesman claiming that it all happened in a ‘split second’, the video clips show a large group of photographers and videographers following the miscreant and recording his movement as he struts back and swivels around, dramatically pointing his countrymade pistol. 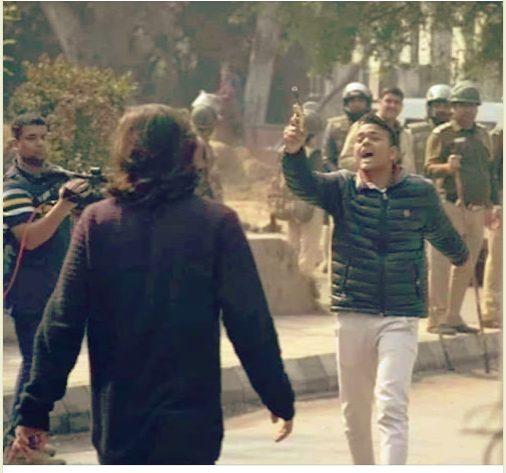 It is to be noted Jamia students have been protesting since December 15 last year after police stormed the campus and vandalised library, beat up students.
Meanwhile, Indian National Congress General Secretary Priyanka Gandhi Vadra took to Twitter criticising the Narendra Modi-led BJP government at the Centre. She wrote: “All this is possible when the ministers and leaders of the BJP government will incite people to shoot, give provocative speeches. The Prime Minister should answer what kind of Delhi he wants to build? Do they stand with violence or non-violence? Do they stand with development or with chaos?”
Following the incident, Union Home Minister Amit Shah on Thursday said that the central government will not tolerate such incidents and said that the culprit behind the firing will not be spared at any cost.
Congress leader Rahul Gandhi while participating in a protest against the Citizenship Amendment Act (CAA), NRC and NPR asked: “who paid Jamia shooter”.
Splco Reporter
Special Correspondent Group of right thinking writers who eulogise self expression in quest of truth in news making jointly contribute under the platform of splco.me a novel social media channel.

“BJP members are not allowed inside” board in Greater Noida village

The village in Greater Noida which was adopted by Union Culture Minister Mahesh Sharma does not want him or any of his BJP colleagues to come there.  They have put up a board at the entrance, which says “BJP members are not allowed inside”. The board was put up on Sunday, October 28, after officials Read More…

“The 2019 General Elections appear to have been one of the least free and fair elections that the country has had in the past three decades or so,” 64 former IAS, IFS, IPS and IRS officers said in an open letter to the Election Commission. The letter has been endorsed by 83 veterans and academics. Read More…

Congress in Gujarat won eight out of 12 seats in the elections to the board of directors representing the 11 blocks of the Kaira District Cooperative Milk Producers Union Limited, popularly known as Amul Dairy.    The elections were held on Saturday after the stipulated period of five years. Locals apprise the loss in election Read More…