Skip to content
Share via
In interview local daily DC ., Dr. Tamilisai Soundararajan said the government’s response to her requests for information has been unsatisfactory.
On the count of COVID-19 disclosure, the governor’s views square with remarks made by the Telangana High Court which has criticized the government for suppressing facts on the pandemic.
Soundararajan said the information she sought from the government related to the spread of the disease, the rate of testing and disease management and containment.
In the interview, the governor said she visited the Nizam’s Institute of Medical Sciences (NIMS), where several doctors have tested positive for the COVID-19 virus, to show solidarity with the medical professionals as she was a doctor herself. The state health department was not very happy about the visit, she said. 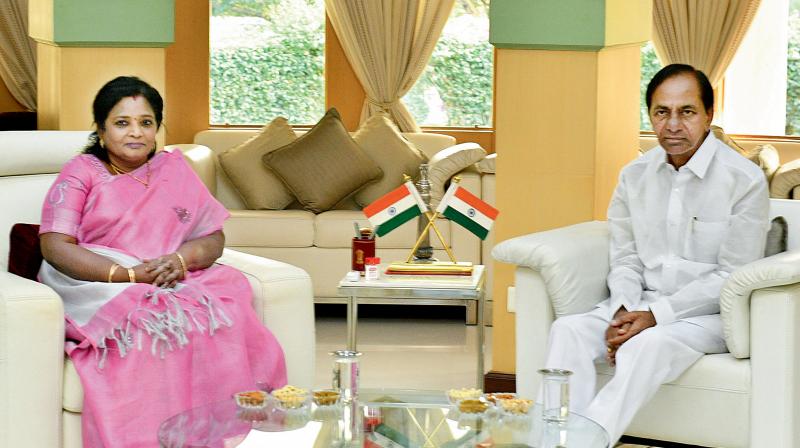 The government’s response has been similarly lukewarm to the several letters she has written to the state government nudging it to follow central government guidelines, increase testing, and share correct information on the extent and impact of the disease.
“I have been communicating my concerns and suggestions on the COVID situation to the state government.
Asked if she gets a detailed daily brief on the COVID-19 situation in Telangana, the Governor laughed and said: “I also get a COVID-19 bulletin at the end of the day from the health department.”
In the governor’s opinion, the government should have been more open and responsive to her letters; a lack of openness indicates a desire for secrecy.
I have written several letters over the past couple of months,” the governor said. But the state government’s response has been “less than satisfactory”.
She affirmatively added , “Even basic information is not shared.”
Soundararajan said she could “no longer watch quietly” when there was an outbreak of coronavirus cases among medical medical professionals at several hospitals in the state capital.
“That is why I decided to go to NIMS and meet with doctors and other medical staff who had contracted the disease just because they chose to risk their lives for the others in society,” she said.
Soundararajan said that as a medical professional, she fully understands the risk to herself when she went to NIMS.
“It is a chance I am willing to take. They are under severe pressure. As a fellow doctor, I wanted to express my support and thank them for their service and assure them that I am with them.”
Authorities at NIMS and the state health department were aghast at her decision to visit the COVID-19 ward and tried to dissuade her.
But she insisted and the authorities reluctantly let her visit NIMS on Monday.
“Medical professionals are our most precious resource in these times. My interaction with COVID-19-affected doctors was to clearly tell them that I stand with them,” she said.
It should be noted  Vociferous Tamilisai Soundararajan used to be a BJP leader in Tamil Nadu prior to her appointment as governor of Telangana in 2019. Telangana State  currently crossed 3900 corona Patients ..

Share via Treated not respectfully   for the Rajiv Gandhi Khel Ratna award, star wrestler Bajrang Punia met Sports Minister Rajyavardhan Singh Rathore and said he has been assured that his case will be looked into. “I was supposed to meet the Minister today but suddenly we got a call last evening for the meeting. Read More…

Share via Probing Agency CBI in the Muzaffarpur shelter home case, on Friday told the Supreme Court that the names of 11 girls alleged to have been murdered by the prime accused and his accomplices had been ascertained and a “bundle of bones” recovered from a burial ground.     The CBI said the names of Read More…

Share via In a shocking development, a news website has claimed that it found a mismatch in EVM vote counts in more than 370 seats that went to polls in the just-concluded Lok Sabha polls.   A report by the news website The Quint claimed that its investigation had found ‘serious discrepancies’ in 373 constituencies Read More…