Skip to content
Share via
The death toll in the building collapse in Dharwad rose 12 on Thursday even as 56 people were rescued. However, officials monitoring the rescue operations suspect that 10 more people are trapped under the rubble.
The NDRF and SDRF teams’ 36-hour rescue mission which began late Tuesday night continued still
The rescue teams, which had earlier avoided using heavy machinery fearing risk to survivors under the debris, finally deployed excavators on Thursday to clear the rubble as there seemed no hope of finding survivors.
Rescue operations continued overnight on Wednesday when a man and a woman were rescued
Meanwhile, the police ruled out the possibility of 12 girls being trapped in a cyber cafe in the building. An officer said rescuers found no bodies in the building and no one had come forward looking for any missing girls. 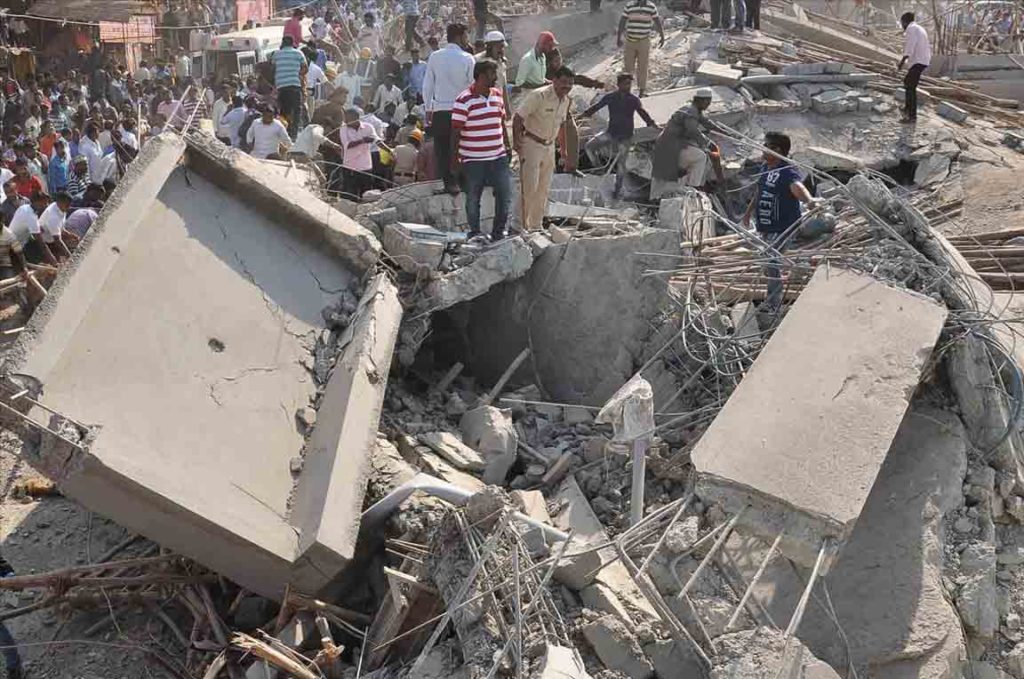 Chief Minister H D Kumaraswamy on Thursday evening visited the site at Kumareshwar Nagar and reviewed the operations. He spent almost 45 minutes at the site and consoled the bereaved families.
He told reporters that the entire operation will be concluded in the next two days. Prima facie, poor quality of work is responsible for the disaster and action will be taken against the guilty.
On the demand by BJP leaders that a judicial inquiry be ordered into the crash, Kumaraswamy said the state government was capable of conducting a speedy and fair probe and bringing the culprits to the book.
He said the regional commissioner of Belagavi division has already ordered a magisterial inquiry into the disaster. Action will be taken based on the outcome of the probe.
If there is a need for a higher probe, the government is open for a parallel inquiry, he assured. Expressing shock over man-made disasters in Dharwad, Mudhol, Sulvadi and Mandya in the recent past, Kumaraswamy said he was contemplating bringing in a law to prevent such disasters.
To handle disasters, there is a need for quick response teams and the government was seriously considering setting up units of 100 well-trained men in each revenue division on the lines of State Disaster Response Force (SDRF), he said.
The chief minister has already held discussions in this regard with DGP (Fire & Emergency Services and SDRF) M N Reddi.
On the demand for higher compensation to the victims, Kumaraswamy said he had authorised the Chief Secretary to take an appropriate decision and help the victims. “Since the model code of conduct is in force, I am unable to announce the quantum of compensation,” he added.
Meanwhile, the disaster has turned the lives of survivors and the families of the deceased upside down.
Several heart-rending scenes emerged as the tireless NDRF and SDRF personnel brought out bodies and survivors in their marathon operation.
The mental and physical trauma that Prema Unkal, a resident of Shivanandanagar, underwent during the 36 hours under the debris was indescribable.
For almost 36 hours before being rescued by NDRF and SDRF officials , she could only look at the lifeless body of her daughter and cry in agony not from her own injuries but at losing her daughter.
She heard her daughter’s cries for just a few minutes after the building crashed but there was dead silence till the rescuers arrived.
The blood-soaked body of her daughter, Divya Unkal (8), was brought out almost 12 hours after Prema was rescued.
Prema is inconsolable and every time she thinks of her daughter, she wakes up with a shudder from the hospital bed.
For Jyothi Hiremath who is seven months’ pregnant, the wait for her husband and father-in-law ended in sorrow, as rescuers brought out their bodies on Wednesday.
Mahesh Hiremath (62), a retired Karnatak University employee, had used his pension funds to start a paint shop in that building three months ago. His son Ashit (28) and he were in the shop when it collapsed.

Share via BJP national president J P Nadda on Monday assailed the opposition DMK in Tamil Nadu accusing it of being a “sheltering ground for people not working in the interest of the nation” and “always inciting feelings against national spirit.”   He appealed to his party members to give a befitting reply to the Read More…

Share via BJP’s Union minister Anant Kumar Hegde has waded into another controversy after his comments that “the hand that touches a Hindu woman must not exist” as he attacked Congress leader Dinesh Gundu Rao over his reaction.   Hegde made the “hands” comment on Sunday while, addressing a function organised by the Hindu Jagrana Read More…

Share via Interstate  political controversy has erupted over the attack on workers from Bihar and Uttar Pradesh in Gujarat that was sparked off after a rape incident. Congress president Rahul Gandhi on Tuesday put the blame over the violence on the “crumbling” governance in BJP-ruled Gujarat while RJD raised heckles over calling the workers “migrants”. Read More…