Skip to content
Share via
It has been 75 years since one of the worst humanitarian disasters the Bengal Famine — hit the then undivided Bengal. Taking advantage of the ongoing World War II, the British in 1943 managed to censor news and sweep the massive death toll under the carpet; since then, however, historians and researchers have generously pegged the figure to at least 30 lakh.
History books state that there were multiple causes of the famine natural, social and imperialism under the British Raj. Natural causes included a cyclone in January and an outbreak of a fungus that destroyed rice plants, effectively stopping supply of rice from Burma. But, it was the policy of the British government that merits most blame.
After much delay, the famine was declared, but even then, as much as 70,000 tonne of rice was exported from India to Britain. To make matters worse, help offered by the United States and Canada was refused. 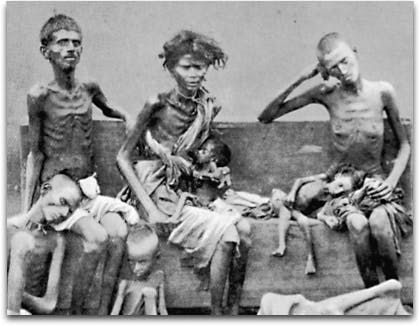 History says that Prime Minister Winston Churchill went on to blame Indians themselves because he said Indians ‘bred like rabbits’ and when he was told about the casualties, callously said he regretted that Mohandas Karamchand Gandhi was not one of the dead.
Parliamentarian Shashi Tharoor has squarely blamed Churchill for the deaths, as he elaborates in one of his articles in The Washington Post.

“Thanks to Churchill, some 4 million Bengalis starved to death in a 1943 famine. Churchill ordered the diversion of food from starving Indian civilians to well-supplied British soldiers and even to top up European stockpiles in Greece and elsewhere,” he wrote.

“There had been so many articles written about it, besides paintings and films,” said noted historian Gautam Bhadra, adding, “I used to get severely reprimanded by my father if food was wasted. I was told that we need to respect food because there were people out there who died of starvation.”
Bhadra recalls that Nobel laureate Amartya Sen, in his book ‘Poverty and Famines: An Essay on Entitlement and Deprivation’ wrote that in 1943, there was no actual shortage of food. Instead, it was after the British government hiked food price controls, it became an inaccessible commodity for far too many. 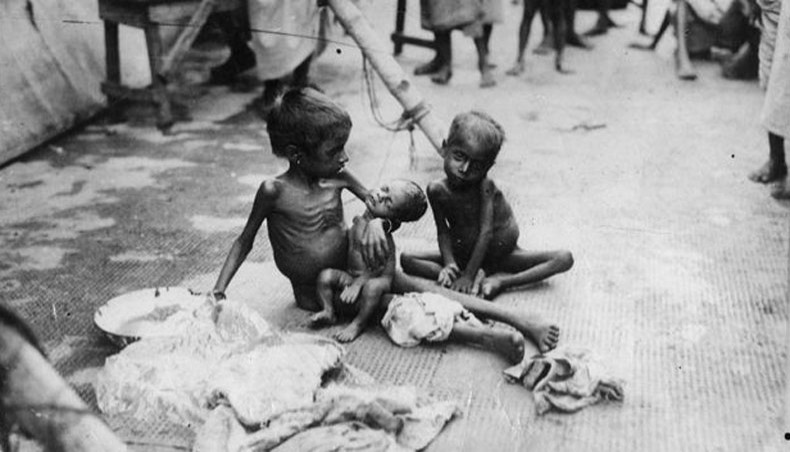 To that end, many who witnessed the ‘man-made’ famine, recall the cries of ‘Fyan dao …fyan dao’ (give the rice water). “They didn’t ask for rice, because it was so scarce. They begged for rice water instead. We were kids at that time, but cries of people who had gone hungry for weeks will haunt forever.
Mothers looking like skeleton with sunken eyes, carrying their emaciated children on their laps looked ghastly. The cries are still like molten lead in our ears,” said Md Mohit, an 84-year-old resident of Banani in Dhaka, Bangladesh.
They lived in the Beleghata area of Kolkata and a ‘maal gadi’ carrying food and grains passed daily. “When it stopped, children used to poke spokes into the locked compartment and collect the little grain that fell out. Army men, too, out of pity would throw some potatoes out,” he said.
There are yet others who recollect stories of people eating pests, so that their crops were not further damaged. Zohra Khatoon, a retired headmistress and now a social worker, recalled, “I grew up to hear stories from my father and uncle that when crops were being harmed by swarms of flying locusts, people started trapping hundreds of those insects with the help of sarees, later frying them up and eating them.”
Written by : Arshad Ali – Title Changed

Share via In a major setback to Modi government., bid to designate Pakistan-based terror group Jaish-e-Mohammed’s chief Masood Azhar as a global terrorist, China on Wednesday put a technical hold on a proposal in the UN Security Council to ban him following the Pulwama terror attack.   The proposal to designate Azhar under the 1267 Read More…

Share via The Indian team celebrates a 2-1 series victory over Australia following play being abandoned on day five in the fourth test match between Australia and India at the SCG in Sydney,   Having let slip the advantage in Perth after a hard-fought win in Adelaide, India got it right in the remaining two Read More…

Share via Using whatsapp app sending money through WhatsApp will be as easy as sending messages to any person in contact claim its creators    To make this feature available in India, the Facebook backed messenger company closely worked with the National Payments Corporation of India (NPCI) and uses the most popular (in India) Unified Read More…