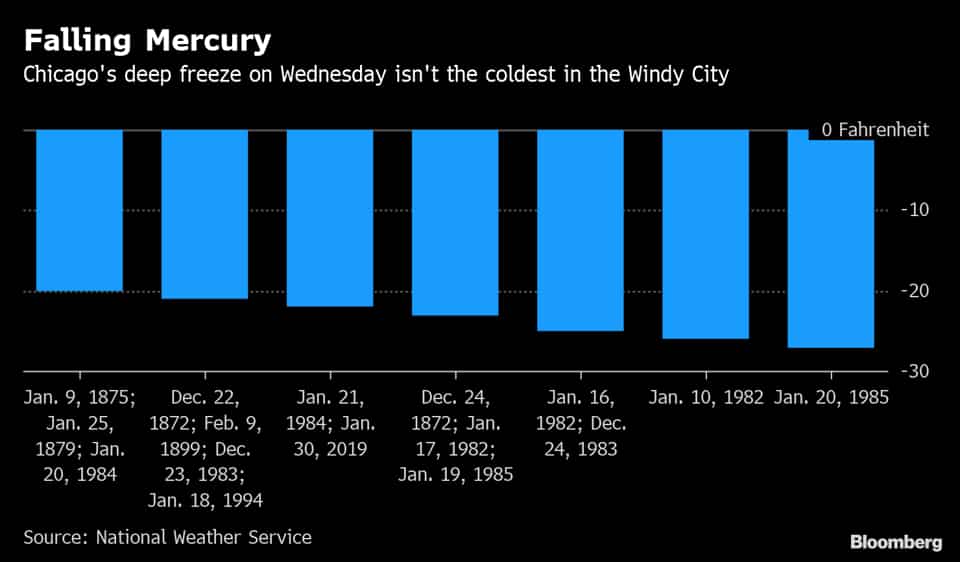 Midwest gas demand surged about 50 percent Wednesday over the previous two days to the highest in BloombergNEF data going back to 2014, and nationwide demand was on track to reach an all-time high, according to preliminary data from S&P Global Platts. Power prices in Minnesota jumped Wednesday to the highest in more than a year.
Spot natural gas for next-day delivery at the Michigan Consolidated hub, serving Chicago, jumped 32 percent to $4.05 per million British thermal units Wednesday, a seven-week high, according to data compiled by Bloomberg. Typically sold at a discount to the U.S. benchmark, it fetched the biggest premium in almost a year.
DTE Energy Co. in Detroit and Minneapolis-based Xcel Energy Inc. asked customers Wednesday to turn down their thermostats to take pressure off power systems struggling to meet winter heating demand.
Though power and gas prices are getting a boost, the current freeze-out isn’t like the polar vortex of 2014 or the “bomb cyclone” in January 2018 that dumped snow as far south as Florida and drained fuel supplies, said Adam Jordan, director of power analytics at Genscape. For one, it won’t last as long as those events, and this time grid operators are better prepared to handle temporary freezes.
“This event just won’t last long enough,” Jordan said in an interview. Gas wells and pipelines should continue to deliver supplies and the Northeast has added capacity to import the fuel. “The infrastructure can handle a two- or three-day freeze.”
Splco Webdesk
Input feed by news sharing arrangement with Syndicate News Agencies by disclosing names viz., Reuters, PTI, ANI, etc.,

US Defence Secretary Jim Mattis resigns over differences with Trump

US Defence Secretary Jim Mattis will be “retiring, with distinction,” in February, President Donald Trump has said, a day after he ordered American troops to rapidly withdraw from war-torn Syria in an abrupt decision criticised by many as premature.   In his resignation letter sent on Thursday, Mattis told Trump it was the “right time” Read More…

Recently during Feb 24th 2020 Indian PM Modi has given a lavish 71million US$ spend rousing reception to USA president Trump .   During Trump visit Ruling BJP party turned no leaves and ensured more than 100s of thousands gathered in Cricket stadium for both Modi and Trump and seeing the crowd both leaders exchanged Read More…

The Carlyle Group will acquire about 25 per cent stake in Airtel’s data centre business, Nxtra Data, for USD 235 million (about Rs 1,780 crore), the company said in a statement on Wednesday Founded in 1987, The Carlyle Group has grown to more than 1,775 employees, $224 billion in assets under management and 32 offices Read More…