Skip to content
Share via
Consumer Electronics Show (CES) by Consumer Technology Association   this year also included a conference panel on how technology can help “create more resilient communities” by tackling problems including poverty, health, education, and sustainability.
The exhibits showcased a broad array of “tech for good” services which use robotics, drones, artificial intelligence and the like.
The show’s “Resilience Marketplace” included technology assisting with emergency preparedness and response, and panel discussions at the event also addressed these issues.
The machines, which have been deployed in other global disaster areas, were among the technologies on display at the 2019 Consumer Electronics Show to highlight innovations which can be used in various kinds of relief efforts.
“We clean the air because it’s much easier to clean air than it is to clean water,” said Yehuda Kaploun, president of Watergen USA, who was demonstrating the device at the annual Las Vegas extravaganza which ends Friday after showcasing futuristic innovations. 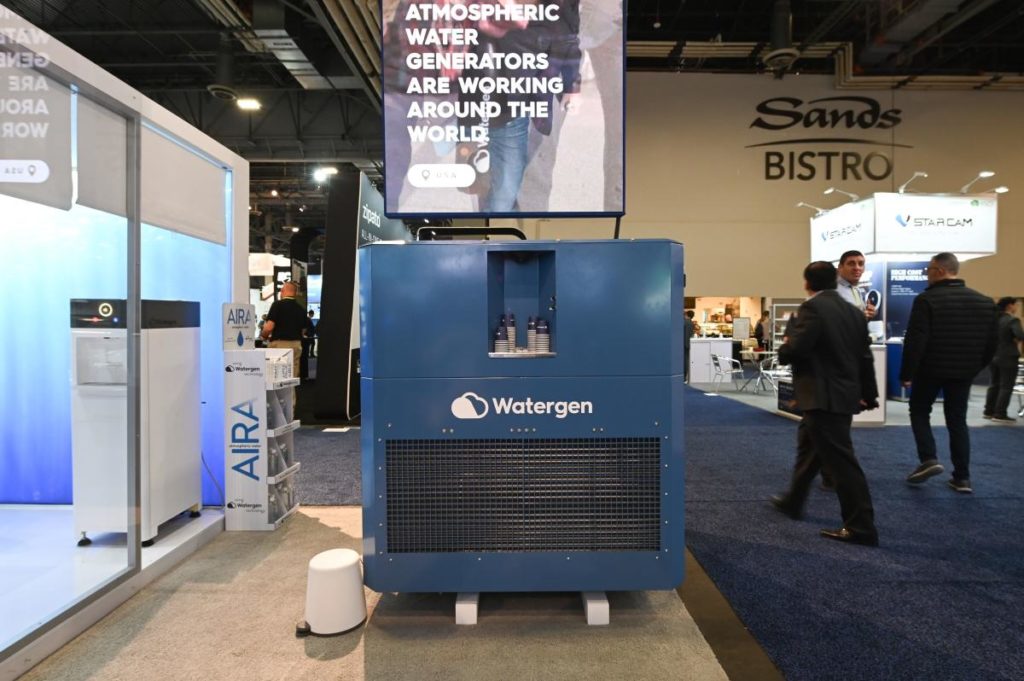 The WaterGen GEN-350 medium-scale atmospheric water generator is displayed at CES 2019 on January 9, 2019 at the Las Vegas Convention Center in Las Vegas.
Watergen claims its technology offered in a commercial size Gen-350 and a consumer version known as Genny has many applications for emergency response and helping the many millions who lack potable water.
“Disaster recovery and public safety is an area in the drone industry experiencing exponential growth with a multitude of real-world applications,” said Ben Marcus, chairman or AirMap, which allows operators to manage drones for emergency response.
“When used for public safety, drones are cheaper, faster, and more effective in keeping people out of harm’s way.” 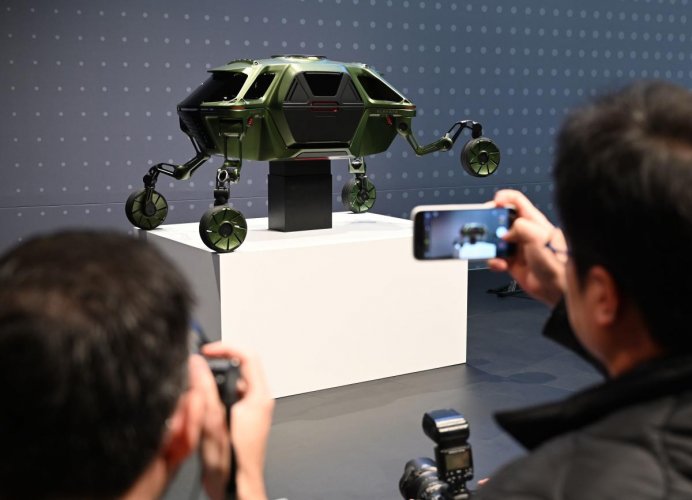 Taiwan-based startup Uupsafety won a CES award for its technology which monitors firefighters with smart wearables that connect to command centers.

Japanese automaker Honda showed its prototype autonomous work vehicle which could be used in a variety of situations including search and rescue, firefighting and snow removal.
“We’ve been testing (the vehicle) in real-world scenarios to demonstrate the value and capabilities of this unique machine,” said Honda executive Pete Wendt.
Honda said it has tested the vehicle in Colorado wildfires, relieving the physical strain of firefighters carrying supplies and water, and using a mode that allowed it to autonomously follow the crews.
South Korea’s Hyundai went a step further, unveiling a vehicle with robotic legs to let it walk or crawl over treacherous terrain.
Hyundai billed its Elevate as an unprecedented “Ultimate Mobility Vehicle” that combines technology from electric cars with robotics.
“What if a car designed with robotics could save lives in disasters?” said Hyundai executive John Suh, who heads the company’s Cradle arm devoted to innovation.
The concept vehicle can drive at highway speeds with the legs retracted but if needed can climb over a 1.5-meter (five-foot) wall, in what the automaker called “a new paradigm of mobility.”

Share via Skoda is all set to reveal its first-ever electric product, the Skoda Enyaq iV electric SUV at a global premiere in Prague, Czech Republic On 1 Sept 2020 . The coupe-SUV’s cabin shows a design that has moved on from current Skoda interiors, with a multi-level dashboard, large free-standing central screen, and minimalist Read More…

Share via In a unique event The Assam Transport Department has cancelled the trade licence issued to a dealer of the country”s largest carmaker, Maruti Suzuki India, for allegedly selling old vehicles by repainting them, officials said on Tuesday.   The District Transport Officer (DTO) of Kamrup Metropolitan, Gautam Das, said a person had filed Read More…

Share via Japanese auto major Suzuki Motor Corporation chairman Osamu Suzuki said at the Global Mobility Summit ‘MOVE’ in New Delhi  , his company plans to start road tests of its electric vehicles (EVs) in India next month as a precursor to launch of EV in 2020 . Suzuki said the company has decided to Read More…

How to install Signal messenger in Desktop & Laptop : Step by Step Process