Skip to content
Share via
The Time-C Voter gave 116 to the NDA and a slight lead for the opposition Mahagathbandhan at 120.
According to Today’s Chanakya survey, 60 per cent upper caste respondents voted for the BJP-JDU, while 29 per cent voted for Congress-RJD. It further added that 69 per cent Yadavs voted for the RJD-Congress, while 22 per cent picked BJP-JDU.
It said that Chirag Paswan who left the NDA just before the election, will not win more than two seats. 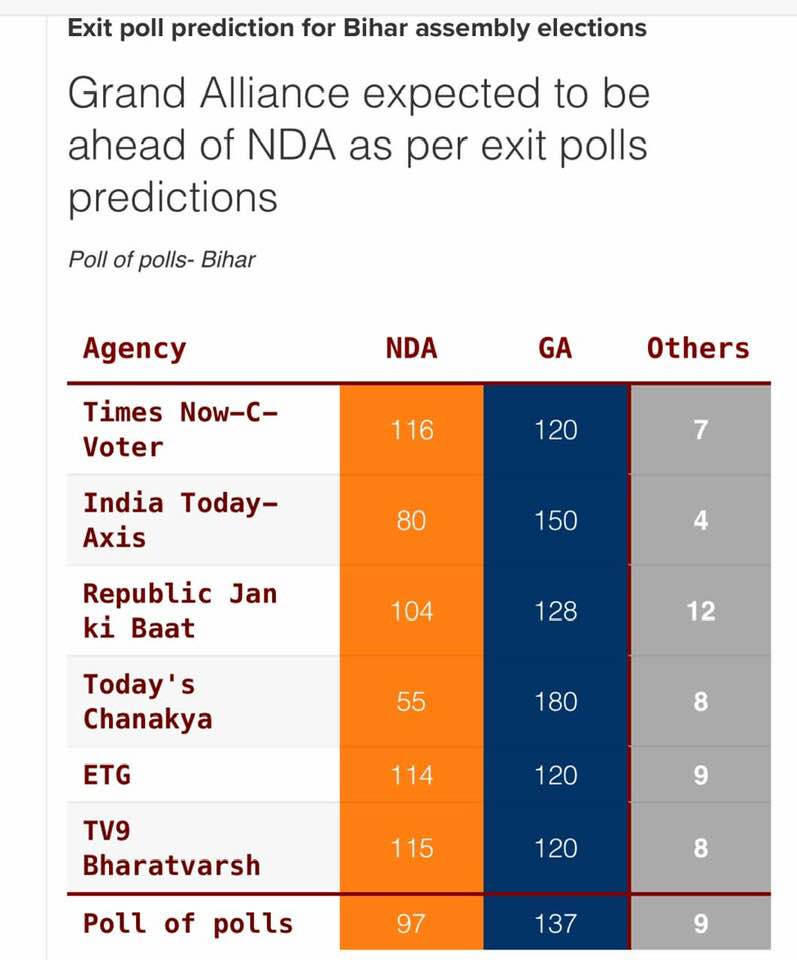 The Republic TV which is known as “the BJP media” among its detractors, gave 118 to 138 seats to the opposition alliance and 91-117 seats to the ruling NDA. Chirag Paswan’s party is likely to win five to eight seats, said the Republic survey.
However, the final results will be Cunted only on Tuesday, November 10.
Any party or coalition needs 122 for a majority in the 243-seat Bihar assembly.

Share via In a scathing statement targeting the BJP led Modi government and also the  family of Sushant, Actor Rhea Chakroborty ‘s lawyer Satish Maneshinde termed it as a “travesty of justice”.   Rhea was charged under NDPS Act Sections 8(C), 20(b)(ii), 22, 27A, 28 and 29, for her alleged role in the drugs angle Read More…

Who owns NaMo TV., even IB ministry don’t have the clue

Share via The Election Commission of India has written to the information and broadcasting ministry, seeking a report on the sudden launch of NaMo TV, just days ahead of the Lok Sabha elections.   The commission has also written separately to Doordarshan seeking to ascertain how the national broadcaster ran an hour-long live broadcast of Read More…

As CM my First Signature is creation of jobs for Bihar People : Tejashwi

Share via Tejashwi Yadav, the Chief Ministerial face of the Mahagathbandan in Bihar, has criticised Prime Minister Narendra Modi for selectively pointing out the issues of Bihar.   Modi did rallies in Bihar on Friday in which he called the Rashtriya Janata Dal’s erstwhile 15-year rule as lawless.   Reacting to Modi’s criticism, Tejashwi Yadav Read More…