Skip to content
[splco_heading size=”15″ align=”left” margin=”30″]PM Narendra Modi’s pet Arogya Setu app and Niti Aayog CEO Amitabh Kant are under attack from the BJP’s affiliate in the  RSS Sangh Parivar – Swadeshi Jagran Manch.[/splco_heading]
Manch conveyor Ashwini Mahajan has tagged Prime Minister Narendra Modi in a series of posts on micro-blogging site Twitter complaining that the Arogya Setu app is promoting e-pharma companies that are offering huge discounts and ‘threatening neighbourhood pharmacy shops’.
Speaking to media , Ashwini Mahajan said, “The Arogya Setu app has a link which leads out of the app to an e-pharma platform which has four companies. These are foreign-funded companies that are offering discounts on online purchases of medicine and other health items.”
He added that his organisation has a serious objection to the fact that the CEO of Niti Ayog is promoting these e-pharma companies through a post on Twitter. 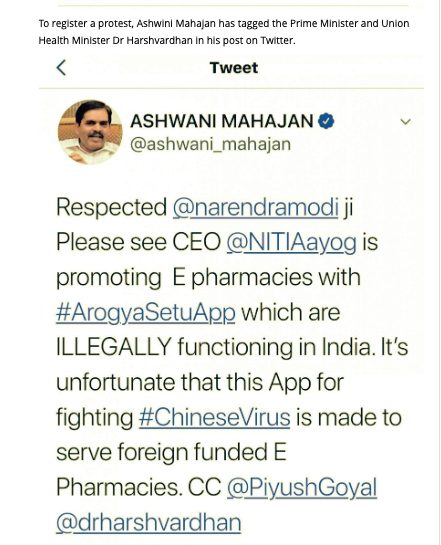 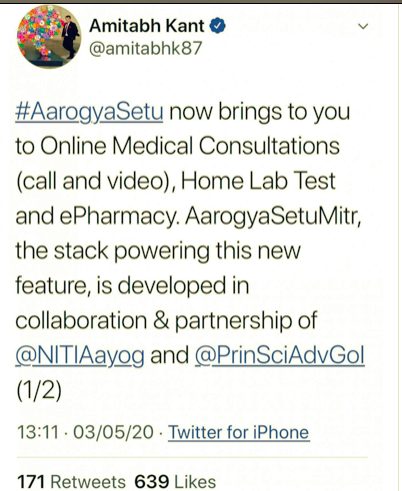 [splco_spacer size=”30″]
To register a protest, Ashwini Mahajan has tagged the Prime Minister and Union Health Minister Dr Harshvardhan in his post on Twitter.
A Manch activist explained that on the home page of the app there is a recently added link – Aarogyasetu Mitra.
If an app subscriber clicks on it a dialogue box opens which informs that it is leading out of the app. The charge is that the Arogya Setu app then leads to a page where there are links for online consultations and e-pharmacy companies – 1MG, OharmEasy, MedLife and NetMeds.
The Swadeshi Jagran Manch’s charge is that “these companies are backed by foreign entities and have been burning cash to edge out the local chemist shops and businesses”.
“If over 10 crore Indians have joined the Arogya Setu platform and they have been linked to these companies which employ predatory practices that pose a threat to 7 lakh chemist shops in India,” Ashwini Mahajan said.
Manch fears that due to the lockdown and 7 pm to 7 am nationwide curbs on movement, more and more people may start picking the e-pharma option and that would hurt the local chemists.
The Swadeshi Jagran Manch has also posted a court order on social sites.
The order was issued on 18 December 2018 in which the Delhi High Court had ruled that “the respondents are injuncted from the online sale of medicine without a licence and the respondents are directed to ensure that the same is prohibited forthwith until further orders”.
This is the second salvo the Manch has fired since the lockdown began.
The government recently had cleared the delivery of non-essentials by e-commerce sites. Following objections from Swadeshi lobbies and trader associations, the guidelines were revoked.
Also read : Modi Promoted Sanskrit Named Aarogya Setu App A Hit Or A Flop ..
Splco Reporter
Special Correspondent Group of right thinking writers who eulogise self expression in quest of truth in news making jointly contribute under the platform of splco.me a novel social media channel.

The central government has not accepted the offer of $100 million (Rs 7 billion) made by the crown prince of Abu Dhabi for relief and rehabilitation work in Kerala. Sheikh Mohammed Bin Zayed Al Nahyan had telephoned Prime Minister Narendra Modi and made the offer of assistance, the Chief Minister had said earlier. The UAE Read More…

Ten days after India sealed the government-to-government agreement on the Rafale deal, Reliance Defence and Dassault had announced a joint venture (JV) in the aerospace sector and a year later, the foundation stone of a manufacturing facility was laid in Mihan, Nagpur.  The opposition parties  alleged that the Reliance Defence was formed just 12 days Read More…

Train 18 was flagged off by Prime Minister Narendra Modi on Friday. After the terror attack in Pulwama, the government decided to keep it a simple affair, without any celebrations.   The new train was left bereft of flowers or any other decoration. All celebratory elements were dispensed with at functions planned at stations on Read More…