Skip to content
Share via
The annual Lord Jagannath Rath Yatra began on Tuesday in Puri after the Supreme Court revoked its earlier ban and granted permission to hold the annual chariot festival this year.
The idol of Lord Balabhadra has been brought to the chariot by priests and ‘sevayats’ for the Rath Yatra from Jagannath Temple in Puri.
The Apex Court has permitted the state to hold the festival with restrictions in the wake of the COVID-19 pandemic.
As per the order, it has allowed only 500 people to pull the chariots. According to the police, an Additional Director General of Police is supervising the arrangements for the yatra.
[splco_spacer] 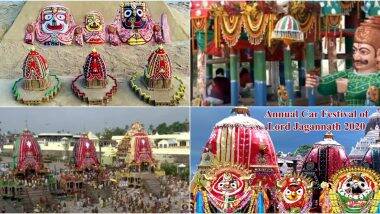 [splco_spacer]
The pulling of every chariot is being supervised by a senior officer.”We have done a good arrangement for Rath Yatra after Supreme Court has found a midway to perform the Yatra here where the devotees can attend it from their houses, over the televisions and their smartphone.
It is the safest way to be a part of the Rath Yatra from a remote area,” said a police officer. Performing artists, priests were also seen participating in the Rath Yatra.
A performing artist who was present ahead of the Ratra said, “Lord Jagannath likes to watch dance and I’m here to do the same and offer my prayers.”
“We have come for the darshan of Lord Jagannath. I believe that now the corona will go away,” a participating priest said. The district administration has also ensured the following of all health guidelines in the wake of COVID-19.
“We will be ensuring that the participants are wearing masks and are following social distancing norms,” said Balwant Singh, District Magistrate of Puri.
The Supreme Court on Monday modified its earlier order and allowed the annual Jagannath Rath Yatra in Odisha’s Puri to be held with the coordination of the Temple committee, state, and Central government without compromising with the health issue pertaining to COVID-19.
[splco_spacer] 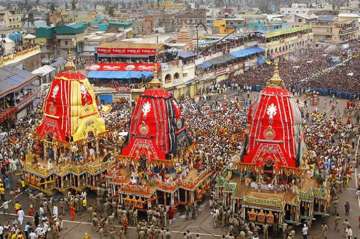 [splco_spacer]
A three-judge bench headed by Chief Justice of India (CJI) Sharad Arvind Bobde said that the apex court is only considering conducting the yatra in Puri and not anywhere else in Odisha.
“Rath, i.e, Chariot, shall be pulled by not more than 500 persons. Each of those 500 persons shall be tested for the Coronavirus. They shall be permitted to pull the chariot only if they have been found negative. The number 500 shall include officials and police personnel,” the Apex Court’s three-judge bench said in its order.
Post Supreme Court order The King of Puri Gajapati Maharaj Dibyasingha Deb sweeps the chariots with a broom having a gold handle, as part of the ‘Chhera Pahanra’ ritual, during the #RathYatra at Puri’s Jagannath Temple.
The Jagannath Ratha Yatra is a centuries-old festival which takes place in Jagannath Puri, India. It celebrates the return of Krishna (Jagannath) along with his brother and sister (Balarama and Subhadra) to Vrindavan.
[splco_spacer] 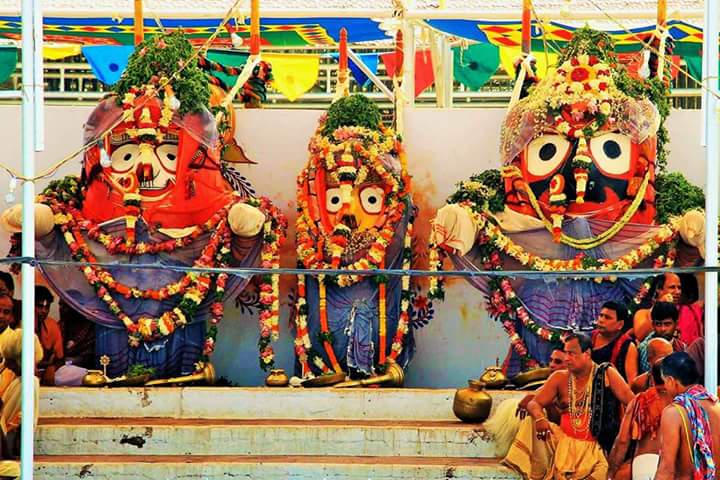 [splco_spacer]
In this Yatra, Lord Jagannath comes out of his sanctum sanctorum to give Darshan to all his devotees. It is believed that the one who becomes the part of Rath Yatra, get rid of his sins and will go to heaven.
The three deities – Lord Balabhadra, Lord Jagannath, and Devi Subhadra’s chariots will be pulled by the devotees in the presence of lakhs of people on the grand road.
[splco_spacer]
[splco_spoiler title=”History of Puri Jagannath Temple ” icon=”arrow-circle-2″]The temple was built by the Ganga dynasty king Anantavarman Chodaganga in the 12th century CE, as suggested by the Kendupatna copper-plate inscription of his descendant Narasimhadeva II. Anantavarman was originally a Shaivite, and became a Vaishnavite sometime after he conquered the Utkala region (in which the temple is located) in 1112 CE. A 1134–1135 CE inscription records his donation to the temple. Therefore, the temple construction must have started sometime after 1112 CE.The temple annals, the Madala Panji records that the Jagannath temple at Puri has been invaded and plundered eighteen times. [/splco_spoiler]
[splco_spacer]
[splco_spoiler title=”Management of Puri Jagannath Temple” icon=”arrow-circle-2″]fter independence, the State Government, with a view to getting better administrative system, passed “The Puri Shri Jagannath Temple (Administration) Act, 1952”. It contained provisions to prepare the Record of Rights and duties of Sevayats and such other persons connected with the system of worship and management of the temple. Subsequently Shri Jagannath Temple Act, 1955 was enacted to reorganize the management system of the affair of the temple and its properties. Dibyasingha Deb is the “adhyasevak” (chief servitor) of the temple. He took the role in 1970 at the age of 17, after the death of his father, Birakishore Deb, then the Maharaja of Puri.[/splco_spoiler]
[splco_spacer]
[splco_spoiler title=”Vaishnava traditions in Puri Jagannath Temple ” icon=”arrow-circle-2″]Unlike the stone and metal icons found in most Hindu temples, the image of Jagannath is made of wood and is ceremoniously replaced every twelve or nineteen years by an exact replica. It is one of the Char Dham. The temple is sacred to all Hindus and especially in those of the Vaishnava traditions. Many great saints, such as Ramananda and Ramanuja, were closely associated with the temple. Ramanuja established the Emar Mutt near the temple and the Govardhan Mutt, which is the seat of one of the four Shankaracharyas. It is also of particular significance to the followers of the Gaudiya Vaishnavism whose founder Chaitanya Mahaprabhu, was attracted to the deity, Jagannath, and lived in Puri for many years. Non-Hindus are not permitted to enter the temple. Visitors not allowed to enter may view the temple and precinct from the roof of the nearby Raghunandan Library and pay their respects to the image of God Jagannath known at the main entrance to the temple. There is some evidence that this policy came into force following a series of invasions by foreigners into the temple and surrounding area. Unlike in many other temples, devotees can go around and behind the idols. During the special darshan, or parimanik darshan, devotees pay a small fee to go right up to the statues. All devotees are allowed to go right up to the deities during the sahana mela (general appearance) 7-8:00 am without paying any fees. [/splco_spoiler]
[splco_spacer]
It is be noted on the date of Chariot festival India remains   in the 4th Place in Global rank with 441,643  Corona Patients and in 8th Rank globally  with 14,027   deaths of Indians
[splco_spacer]

Bengaluru burns : 3 killed in Midnight attack over 100 plus rioters arrested

Share via Three people have reportedly died and several others injured in the arson that resulted after an inflammatory social media post in parts of East Bengaluru. Over 100 rioters have been arrested, said the police on Wednesday.   Police have imposed Section 144 of Code of Criminal Procedure (CrPC) in Bengaluru to prohibit the Read More…

Share via August 5 2020 is the first anniversary of the revocation of Jammu and Kashmir’s special status, that is the day BJP party run Modi led  Indian government that removed  article 370 with out obtaining any plebiscite from kashmir people Imran Khan government  used this day and released a new bomb shell by way Read More…

Share via Sitting BJP MLA in Uttar Pradesh has sparked a controversy after he said that we would start constructing a Ram temple in Ayodhya on November 25, Sunday, and break every law if needed because faith was above the Constitution.   Surendra Singh’s, an MLA from Bairia, statements comes a day after BJP’s national Read More…