Skip to content
The SP chief heaped praise on Congress president Rahul Gandhi for inducting Priyanka into the party. Akhilesh on Saturday hailed the appointment of Priyanka as AICC general secretary and said that it would help the Congress ”strengthen” its roots in the state.
”The decision to induct Priyanka into the party is good…it is good that Congress is giving opportunities to the youngsters,” Akhilesh said in an informal chat with reporters here.
The SP supremo also evaded a direct reply, when asked about his future relationship with Rahul.
Akhilesh had also avoided a direct reply when asked if he would support the candidature of Mayawati for the post of prime minister.
Akhilesh’s remarks assume significance as his alliance partners and BSP supremo Mayawati has been attacking the Congress. But it is important to note that Mayawati has not so far reacted to Priyanka’s entry into politics.
Interestingly both Akhilesh and Rahul have chosen to avoid criticising each other even after the SP-BSP alliance. ”I respect Akhilesh and Mayawatiji…all of us are fighting to oust the BJP,” Rahul had said. 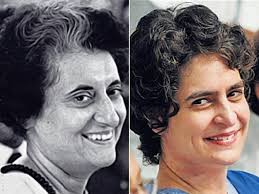 Sources in the SP said that Akhilesh did not want a ”direct fight” with Congress on Muslim dominated seats apprehending that the Muslim votes could get divided, especially after Priyanka’s arrival on the state’s electoral scene.
”We would like Priyanka to focus on seats, where BJP is strong so that she may dent the upper caste vote bank of the saffron party…we do not want any division in the Muslim votes,” said a senior SP leader here.
Priyanka Gandhi arrival has created storm inside Uttar Pradesh and in the days ahead interesting twists and turns is expected in political atmosphere predicts political pundits
Splco Reporter
Special Correspondent Group of right thinking writers who eulogise self expression in quest of truth in news making jointly contribute under the platform of splco.me a novel social media channel.

Two BJP MPs have demanded that a commission be set up to look into the complaints of men “suffering at the hands of their wives” due to “misuse” of laws. Harinarayan Rajbhar, the Bharatiya Janata Party’s Lok Sabha member from Ghosi, Uttar Pradesh, and Anshul Verma, the party MP from Hardoi in the state, said Read More…

In Rajasthan after days of uncertainty created by , Rajasthan Governor Kalraj Mishra who finally made up his mind on Wednesday issued orders convening an Assembly session from August 14.   This comes after Chief Minister Ashok Gehlot-led Cabinet sent fourth proposal to Mishra seeking to convene Assembly session.   “We have again sent a Read More…