Skip to content
The Alibaug Police on Wednesday arrested Editor-in-Chief of Republic Media Network Arnab Goswami for abetment to suicide in a 2018 case. He was charged under Section 306 and Section 34 of the Indian Penal Code (IPC).
To check deep in to 2018 suicide case of Anvay Naik and his mother Kumud Naik Splco gives below time line to its readers:
The case pertains to the sucicide death of Anvay Naik, managing director of Concorde Designs Private Limited, in 2018.
A suicide note by Naik accused Goswami and two others Feroz Shaikh and Neetish Sarda of not paying dues worth Rs 5.40 crore.
Naik and his mother Kumud Naik were found dead in their home in Kavir village of Alibaug in Maharastra
Anvay was found hanging on the first floor, while Kumud’s body was found by the police on the ground floor.
The police had found a suicide note written in English in which Anvay said he and his mother decided to take the extreme step on account of payments due to them not being cleared by the owners of three companies
(i) television journalist Arnab Goswami of Republic TV,
(ii) Feroz Shaikh of IcastX/
(iii) Skimedia and Niteish Sarda of Smartworks. 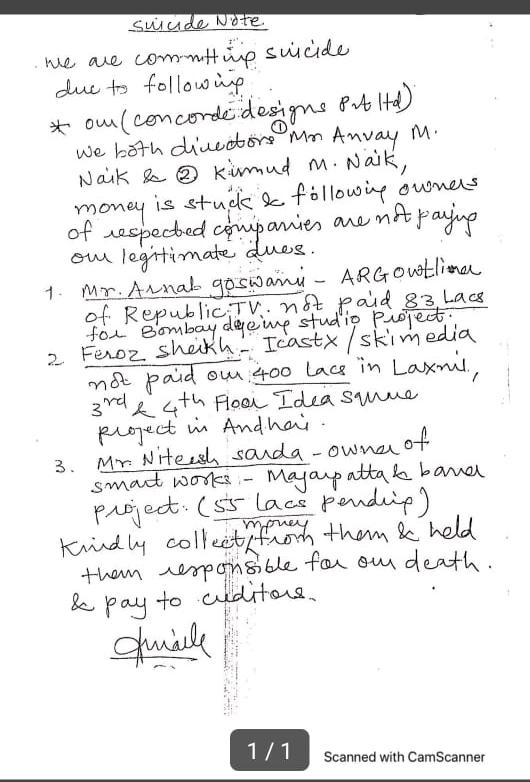 The three firms owed Naik’s company, Concorde Designs Pvt Ltd, Rs 83 lakh, Rs 4 crore and Rs 55 lakh respectively, the note added.
An officer said that during the investigation they found that Anvay was in heavy debt and was struggling to repay money to contractors.
In 2018, the Alibaug police had filed a case of abetment to suicide but in 2019 the case was closed by Raigad Police.
But Anvay’s daughter urged the Maharashtra Home Minister Anil Deshmukh to reopen the case.
“Adnya Naik had complained to me that Alibaug Police had not investigated non-payment of dues from Arnab Goswami’s public which drover her entrepreneur father and grandma to suicide in May 2018. I’ve ordered a CID re-investigation of the case,” Deshmukh had tweeted in May.
Adnya had also alleged that the police had not investigated the angle of Rs 83 lakh that Goswami had not paid her father that drove him to commit suicide.
While the Home Department had transferred the case to CID in May this year, officers outside Arnab’s residence Wednesday said the very court where the Raigad police had filed a closure report had given permission to Raigad police to reopen the case now.
CID officials said they have no case against Goswami.
During Corona lock down period in August, the wife of the interior designer had called for action against Goswami in a video message on Twitter.
The caption of the tweet read, “Arnab Goswami is shouting for Sushant Singh Rajput’s suicide, but what about my husband and mother-in-law who suicided because of Mr. Arnab Goswami?
What is happening to my case? When will justice be granted to our family?
WHY STILL THERE IS NO ACTION?” pathetically asks the victim’s kin

Ex-BSF jawan Tej Bahadur Yadav, who was sacked from service after he uploaded a video complaining of bad quality food being served to the forces, on Friday said he will contest the upcoming Lok Sabha elections from Varanasi constituency in Uttar Pradesh against Prime Minister Narendra Modi.   Yadav, a resident of Rewari in Haryana, Read More…