Skip to content
CBI , ED having failed to progress anything in Sushant Suicide  case In a new development in the Sushant Singh Rajput death case and the alleged drug-nexus in Bollywood, Narcotics Control Bureau (NCB) on Wednesday sent summons to
Deepika Padukone,
Rakulpreet Singh,
Simone Khambata,
Sara Ali Khan,
Shraddha Kapoor,
Namrata Shirodkar, a total 8 people including Karishma Prakash and Shruti Modi.
According to sources, Shruti, Simone and Rakulpreet have been summoned for September 24
Deepika and Karishma for September 25, and Sara Ali Khan and Shraddha Kapoor for Septemeber 26.

#RheaChakraborty's lawyer Satish Maneshinde has denied the actress dropping any names from the #Bollywood industry. The lawyer further adds that if #NCB is making any such claims that the actress had revealed names, are just untrue#SushantSinghRajput #NCBArrestStarted #DrugChat pic.twitter.com/l4JBhDklMJ

This comes after PTI reports from earlier today that the probe agency might summon Deepika Padukone soon if needed.
[splco_spacer] 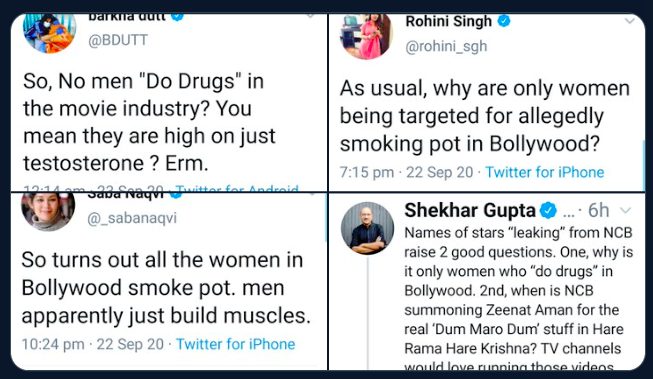 [splco_spacer]
Bollywood actors and media personalities  allege targeting only women  is vindictive attitude of centre government after having they  failed to prove Sushant suicide case as death case and also having failed money transfer but  now indulge in drugs purchase case to Bollywood actors but only women
[splco_spacer]
At the time in  India when corona spread reaches top in the globe , India  farmers crying for their rights,  also  catching of 30 kgs of Ganja goes unnoticed but targeting Bollywood especially women artists is not account to diversion tactics by BJP government asks netizens at large

So not just #Bollywood haan?? https://t.co/MRztmSfdG2

With in week  after submitting his Ministry Post and divorced away from BJP , the Rashtriya Lok Samta Party (RLSP) chief Upendra Kushwaha joined the UPA on Thursday.   The announcement of Kushwaha joining the grand alliance of opposition parties in Bihar was made at a press conference at the AICC headquarters here in the Read More…

Moderate to high voter turnout was recorded in the 95 constituencies in 11 states and Puducherry that went to polls in the second phase of Lok Sabha elections which were marred by sporadic incidents of violence in West Bengal and Manipur and EVM glitches.   There were also reports of EVM malfunctioning in some seats. Read More…

The GST Council in its meeting on October 5 said registered person having an aggregate turnover up to Rs 5 crore may be allowed to furnish return on a quarterly basis along with monthly payment of tax, with effect from January 1, 2021.   With the launch of the QRMP scheme on December 5, taxpayers Read More…