Skip to content
The Congress on Tuesday alleged that the government officials and Bharatiya Janata Party (BJP) leaders have been involved in a money laundering scam that exchanged demonetised currency notes past the deadline set by the Reserve Bank of India (RBI) for a commission of 40 per cent.
Addressing a press conference at the Congress headquarters, former Law Minister Kapil Sibal played a video clip of a sting operation in which, he claimed, a government official said that the BJP’s top leadership was involved.
In the video clip, Rahul Ratharekar from the government’s intelligence agency, Research and Analysis Wing (RAW), claimed to an undercover reporter that officials from 26 departments were involved in the money exchange operation.
Rahul, with his wife by his side, is sitting in a suite in Hotel Trident, Mumbai and explaining the operation.

If the R&AW operative is to be believed, the RBI had been printing 30% to 35% of the currency abroad, and a substantial part of it was duplicated, alleged Kapil Sibal.

As much as Rs 3 lakh Crore, he claimed, were printed abroad in duplicates, and flown to the Indian Air Force base at Hindon on the border of Delhi, from where the currency got transferred to the RBI. RBI’s deadline to exchange old currency expired on December 31, 2016.
He also alleged that a team of government officials drawn from different departments were engaged in the exchange of old notes for the new ones post demonetisation. 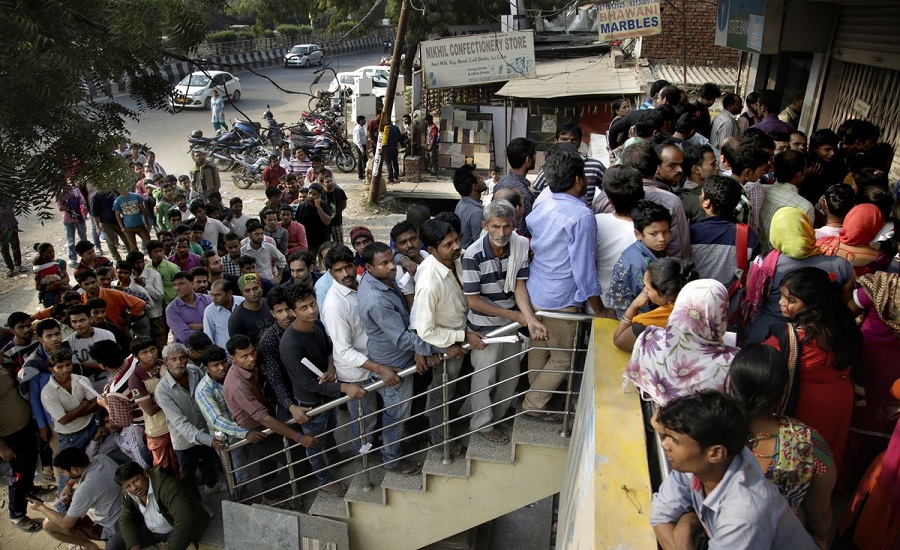 He named one Nipun Sharan from the PMO as the person coordinating the operation. Sibal mentioned that in all probability, it is a pseudonym since his enquiries about a man with this name had drawn a blank.
But the field operative names Amit Shah twice in the video clip, and says that during the currency exchange, it was ensured that no intervention would be made by any other agency including the police. A team of 26 people had been formed to oversee this currency transaction.

Another video clip showed the official of a private bank carrying out the exchange of old currency for new ones. The manager of the Fort branch of IndusInd bank in Mumbai, Sanjay Shane, is seen facilitating the exchange of Rs 100 crore of old currency with new currency. The transaction takes place in a godown of the Maharashtra Industrial Development Corporation. Shane is told that there were clients waiting to exchange as many as Rs 320 Crore.

Sibal added that the entire sting video was available on the website of Tricolour News Network (TNN). He, however, did not confirm authenticity of the videos, and maintained that all the names mentioned in the clip were in the public domain and could be independently verified by the agencies.
He also emphasised that the team was headed by Amit Shah and alleged that currency from ministers and business houses were brought in planes to Hindon air base from where it was taken to the Reserve Bank at a commission charge of 35 to 40%. He said that his worst suspicion that demonetisation was the biggest financial scam has turned out to be true.
He added that Amit Shah was the kingpin after the demonetisation for facilitating exchange of old currency for new.
The former law minister’s press conference on Tuesday is the second in a series on the issue of demonetisation.
On March 26, Sibal had played another sting by TNN, where a BJP worker was allegedly involved in such an exchange of old currency.
Unauthenticated materials furnished by political parties usually warrant a heavy dose of scepticism, but the purported details disclosed by the Opposition party stood out because of the specifics like names, places of meetings, a defence service and a specific air base.
The nature of the allegations is so grave that it should not be swept under the carpet, and only a government agency will have the access and facilities to either corroborate or dismiss the allegations.
“The clips identify individuals who can easily be confronted and investigated. The I-card of RAW official (name), who is posted at the cabinet secretariat, is seen in the video. (Bank name) manager (Mumbai, Fort Branch) (officer’s name) has been identified. An FIR should be lodged,” Sibal added.
As a response to this by the ruling party, PTI quoted Union law minister Ravi Shankar Prasad as saying: “Kapil Sibal has made false allegation… We will take legal action.”

Twitter-like Weibo account in China is very trendy and famous .   Prime Minister Narendra Modi’s Weibo account was set up in 2015 amid much fanfare and publicity at the time of his first visit to China as prime minister. Modi’s posts on Weibo were in Chinese.   Modi not only met 18 times with Read More…

A complaint against Dr Shanmugam, who is in government service, was filed on July 11 at the Adambakkam Police Station here by the 62 year old widow’s relative Balaji Vijayaraghavan.   The 62-year-old woman has been living alone in her apartment for the last year following her husband’s death.   62-year-old widow, who is living Read More…

The Income Tax department raids against the Makkal Needhi Maiam party treasurer has put actor turned politician Kamal Haasan in a spot .   It should be noted Just days ago in the India Today conclave, Kamal who seldom speaks against BJP at centre has said that he has no fear of any central agency Read More…