Skip to content
Share via
SKMCH is flooded with kids afflicted with suspected AES (Right top) and mothers make a serpentine queue to get their kids admitted in the Muzaffarpur hospital.
Till two days back, Renu Kumari was not sure whether her five-year-old daughter Varsha would survive or not. Varsha had complained of high fever, followed by convulsions.
As a result, Renu, a resident of Meenapur village in Muzaffarpur, shifted her tiny tot to Sri Krishna Medical College and Hospital (SKMCH), the epicentre, where hundreds of other kids are undergoing treatment for ‘chamki bukhar’.
In local parlance, the acute encephalitis syndrome (AES) is called ‘chamki bukhar’, although doctors and experts have vehemently denied that the kids’ deaths, altogether 138 till date, took place due to AES. 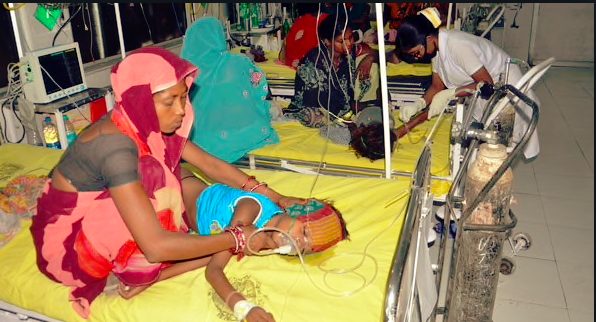 “Whatever be the nomenclature – chamki bukhar, AES or high fever, the fact is that my daughter is now well after being administered proper medicine here at SKMCH.
And we are waiting to be discharged,” Renu told media here on Wednesday, as her daughter, much like other kids, shared the hospital bed with other children afflicted with a similar mysterious disease.
Although mystery shrouds whether the kids died due to the toxin in unripe litchi (juicy fruit), viruses, bacteria, fungi or parasites.

“Three more children have died on Wednesday. While 16 new patients have been admitted to the hospital,” the Medical Superintendent of the SKMCH, Dr SK Shahi told media

Shahi hopes the casualty figure would be arrested as more doctors have been pressed into service from Patna and Darbhanga. “Doctors have been sent from NMCH and PMCH, Patna, besides DMCH in Darbhanga,” he added. 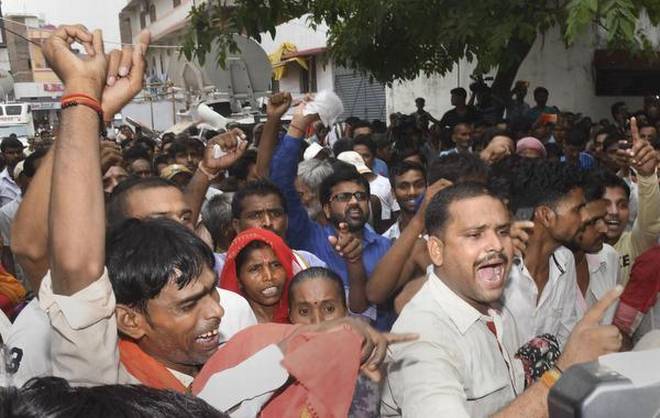 Chief Minister Nitish Kumar, who visited SKMCH on Tuesday and faced angry protest from parents, has ordered that the 600-bed hospital be upgraded to 1500-bed hospital.

However, questions are being raised that when Union Health Minister Harsh Vardhan, had himself ordered upgradation of SKMCH way back in 2014, why the premier hospital in Muzaffarpur (which is flooded with kids every summer suffering from AES) was left gasping.
Harsh Vardhan, like 2014, has announced in 2019 (after his visit to SKMCH on June 16) that the Centre would construct a 100-bed ICU here by April 2020.
As an array of politicians and bureaucrats make a visit to the SKMCH, one ray of hope is Dr Shahi and his team (which includes Dr GS Sahni, HoD, Paediatrics department), who have been working tirelessly to stem the rot.
“With out disclosing the official death figure that varies between 128 ~134 the medical superintendent said. Altogether 118 children have been discharged after proper medication, while 372 are undergoing treatment,”

Share via Congress president Sonia Gandhi intiatied opposition parties integration while chairing the first meeting held amid the lockdown on Friday took on the Narendra Modi-led Central government and termed the Rs 20 lakh crore financial stimulus package as a “cruel joke on the country”.   Taking the corn issue of millions of migrant workers Read More…

Share via Dr Kafeel Khan, who is famous as “saviour of children” in the BRD Medical College case, was booked under the stringent National Security Act (NSA) by the Yogi Adityanath-led UP government. He had been behind bars after the Uttar Pradesh STF arrested him from Mumbai in February 2020. After spending nearly six months Read More…

Share via Madras High Court on Friday quashed criminal prosecution against the wife, son and daughter-in-law of former Union Minister P Chidambaram in a black money case, holding that no offence was made out against them. This is a major relief for Chidambaram and his son Karti who have been fighting charges against them by Read More…