Skip to content
Farmers protesting against the Centre’s three farm laws at Delhi borders Wednesday observed a ‘black day’ to mark six months of the agitation, and burned effigies of the government.
Due to second wave spread of corona  the crowds at the three borders have thinned, farm leaders said that agitation will continue till 2024 if their demands are not met.
Bharatiya Kisan Union leader Rakesh Tikait, during a press conference, also reiterated that farmers will call off the protest only once the three farm laws are repealed.
“It is an absolutely unprecedented movement. Nowhere in the world has something like this been seen. 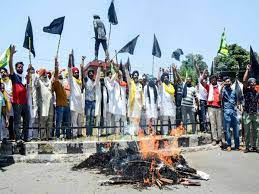 The government continues to keep farmers in the dark and are not listening to their demands. We do not know how this (protest) will end. But we will not move. Even if we have to sit here till 2024, we will do so till our demands are met,” said Tikait.
Farmers meanwhil took out protest marches and raised anti-government slogans in Delhi, Punjab on Wednesday as the protesters observed ‘black day’ to mark the completion of six months of agitation against the three Central agri laws.
Joining the call given by farmers’ unions against the Centre’s three contentious farm laws, farmers at several places in Punjab put up black flags atop their houses on Wednesday.
Farmers on Wednesday put up black flags and burnt effigies of government leaders at Singhu, Ghazipur and Tikri in New Delhi to register their protest against the three laws as well as the Centre.
Senior farmer leader Avtar Singh Mehma said black flags have been hoisted not only at the protest sites but also in villages in Haryana, Punjab and Uttar Pradesh, adding that villagers have put up black flags atop their houses as well as on their vehicles.

DMK President MK Stalin on Monday said when his party comes to power it will pass a law like the one passed by the Kerala government stipulating minimum support prices (MSP) for vegetables.   In a statement issued, Stalin pointing out the rising prices in vegetables soon after the passage of the three farm laws Read More…

The meeting between Indian ministers and representatives of thousands of protesting farmers on Tuesday failed to break a deadlock over a set of new farm law.   India’s vast farm sector contributes nearly 15% of the country’s $2.9 trillion economy and employs around half its 1.3 billion people.   In talks on Tuesday that lasted Read More…

In a Shocking development to BJP government Farmer leaders on Thursday rejected the government’s offer to suspend the three farm laws for 12 to 16 months.   At a full general body meeting of the Sanyukta Kisan Morcha, a complete repeal of three central farm laws and enacting a legislation for remunerative MSP for every Read More…