Skip to content
Puducherry Chief Minister V Narayanasamy welcomes Delhi Chief Minister Arvind Kejriwal as he arrives to support his ‘dharna’ outside the official residence of Lt Governor Kiran Bedi for not permitting implementation of his government’s
Post Kejriwal arrival the carefree attitude of Kiran bedi grounded that made Puducherry Chief Minister V Narayanasamy on Monday night “temporarily” called off his six-day long dharna outside the Raj Nivas after Lt Governor Kiran Bedi agreed to some of his demands.
The breakthrough came at a six-hour long meeting between Bedi, Narayanasamy, his ministerial colleagues and bureaucrats at the Raj Nivas here.
After initial dithering, the two agreed to meet on Monday evening to thrash out a solution to all the issues confronting the Union Territory. 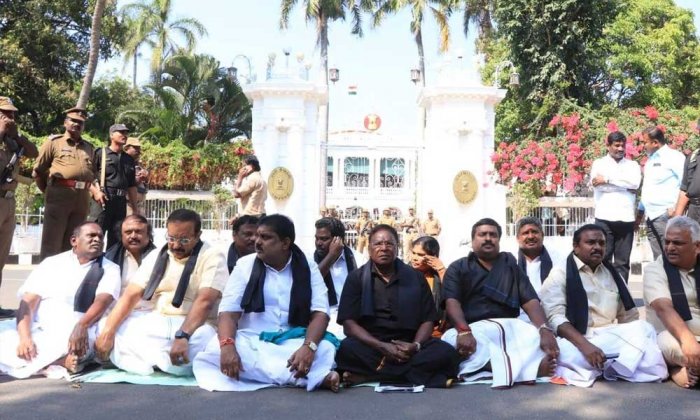 After emerging from the meeting, the senior Congress leader told reporters that the LG has positively responded to part  of his salient demands.
“She has agreed to reconsider the decision of closing down cotton mills in the UT.
The LG has also agreed to allow paying of old age pension for 10,000 beneficiaries to start with,” Narayanasamy said.
“So, we have decided to temporarily call off the dharna,” the Chief Minister announced.
His dharna had received support from DMK and even rival AAP, whose convenor and Delhi Chief Minister Arvind Kejriwal flew down to Puducherry.
The CM had sat on a dharna on Wednesday after the LG implemented compulsory helmet rule at one go against the government’s decision of implementing it slowly.
Splco Reporter
Special Correspondent Group of right thinking writers who eulogise self expression in quest of truth in news making jointly contribute under the platform of splco.me a novel social media channel.

In a series of tweets, the Congress has rejected the government’s claim that the Comptroller and Auditor General report on Rafale deal has proved it right.   The party has said that the CAG report hides “behind the Aligned Price” making the comparison between the costs of 2007 and 2016 Rafale deals meaningless.   Hours Read More…

J Anbazhagan, a Member of the Tamil Nadu Legislative Assembly from the Dravida Munnetra Kazhagam passed away at a hospital in Chennai on Wednesday due to the coronavirus disease (COVID-19).   Anbazhagan was actively involved in MK Stalin’s ‘Ondrinaivom Va’ (Let’s come together) initiative to provide relief materials to the people facing trouble due to Read More…

In a major jolt  to the BJP, Harish Chandra Meena, a sitting MP of the saffron party from Rajasthan, on Wednesday joined the Congress ahead of the assembly elections next month. Meena, an IPS officer-turned-parliamentarian, joined the Congress in the presence of former Rajasthan Chief Minister Ashok Gehlot, state Congress president Sachin Pilot and AICC Read More…