Skip to content
This winter solstice will be a particularly special one as Jupiter and Saturn will be at their closest point for 400 years.
For the past few months, the two gas giants have been approaching each other, and on the night of December 21 the date of the winter solstice this process will culminate in what’s known as a “great conjunction.”
On this night, the two planets will be so close to each other that they appear like a bright double planet with the phenomenon being popularly referred to as a “Christmas Star.”
Great conjunctions are rare, occurring once every two decades or so. But this year’s event is exceptional because the planets will appear particularly close to each other.
The last time the planets came this close in the sky was around four centuries ago, according to NASA.
“You can imagine the solar system to be a racetrack, with each of the planets as a runner in their own lane and the Earth toward the center of the stadium,” Henry Throop, an astronomer in the Planetary Science Division at NASA Headquarters in Washington, said in a statement.
“From our vantage point, we’ll be able to be to see Jupiter on the inside lane, approaching Saturn all month and finally overtaking it on December 21.”
The great conjunction of Jupiter and Saturn coincidentally takes place on the day of the December solstice the shortest day of the year with the longest night in the Northern Hemisphere providing ideal conditions to view the astronomical event. 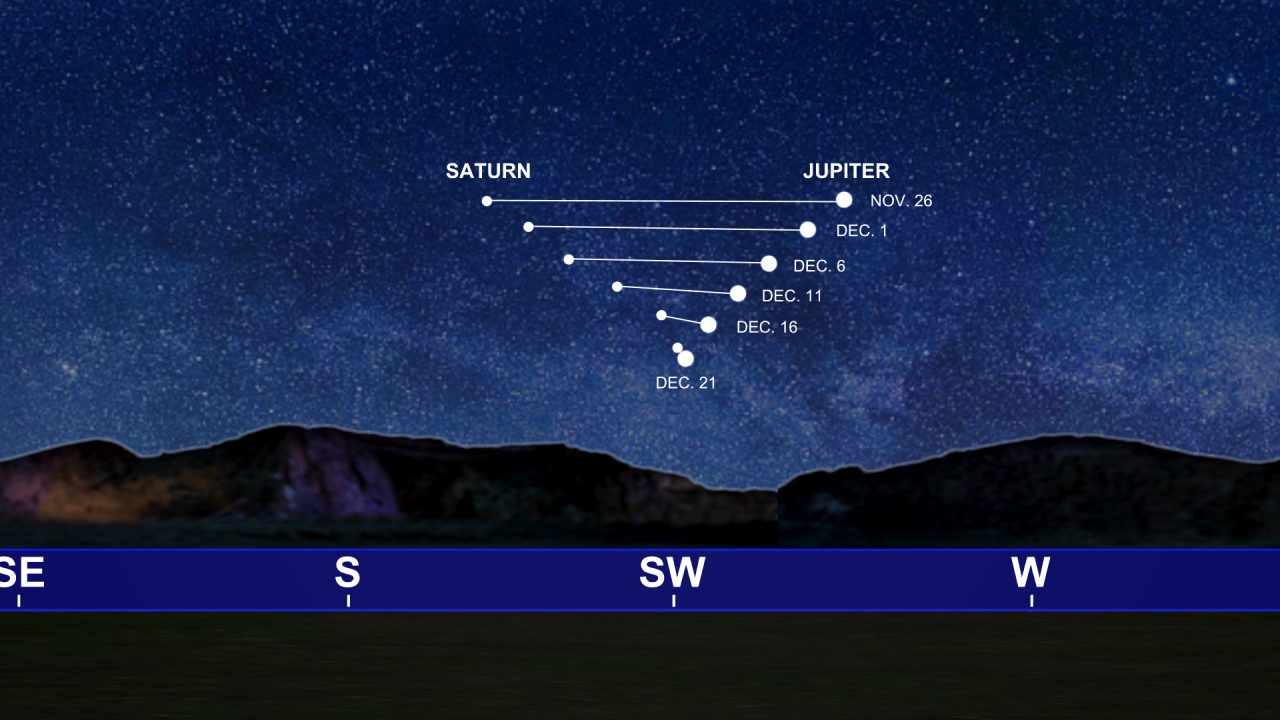 “The solstice is the longest night of the year, so this rare coincidence will give people a great chance to go outside and see the solar system,” Throop said.
While the term “winter solstice” usually refers to an entire day, it technically only refers to a specific moment in time when the Earth’s North Pole is pointing furthest away from the sun.
In 2020, this moment will occur at 5:02 a.m. ET on Monday, December 21 marking the start of astronomical winter in the Northern Hemisphere.
The great conjunction of Jupiter and Saturn is not the only astronomical event stargazers will be able to enjoy around the time of the winter solstice.
On the night of December 21-22, the annual Ursid meteor shower is set to peak, according to the American Meteor Society (AMS).
During maximum activity, observers may be able to see 5-10 Ursid meteors per hour during the late morning hours.
Some outbursts occasionally produce more than 25 meteors per hour.
“The Ursids are often neglected due to the fact it peaks just before Christmas and the rates are much less than the Geminds, which peaks just a week before the Ursids,” the AMS said.

Neowise is a comet discovered on March 27 by NASA’s, Near-Earth Object Wide-field Infrared Survey Explorer, an orbiting telescope.   Astronomers have calculated that the next time the comet makes its visit to the solar system will be 6,800 years later.   The discovery of the comet has come as an opportunity for astronomers and Read More…

NASA Administrator Jim Bridenstine said about 60 pieces have been tracked so far and out of which 24 are going above the apogee of the ISS.   “That is a terrible, terrible thing to create an event that sends debris and an apogee that goes above the international space station. That kind of activity is Read More…