Skip to content
Share via
President-elect Joe Biden on Saturday night claimed “a clear victory” and preached unity .
“America, I’m honored that you have chosen me to lead our great country,” Biden said in a Saturday tweet. “The work ahead of us will be hard, but I promise you this: I will be a president for all Americans — whether you voted for me or not. I will keep the faith that you have placed in me.”
It is to be note that Biden is the oldest person ever elected to the presidency.
Harris is the first woman elected to the vice-presidency.
Ahead of Biden’s speech, music was playing and supporters dancing at the event. The campaign passed out glow sticks and American flags to supporters.
There are some 400 cars at the event, most of which are adorned with Biden-Harris signs. Supporters loudly honked their horns as Harris took the stage. 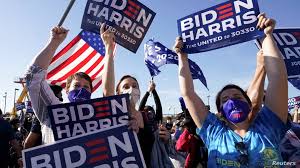 “When our very democracy was on the ballot this election, with the very soul of America at stake,” Harris told supporters. “You ushered in a new day for America.”
“For four years you marched and organized for equality and justice. And then you voted. And you delivered a clear message. You chose hope and unity, decency, science and yes, truth.”
Harris also addressed the history of the moment, as she is set to break one of the highest glass ceilings in American society.
“While I may be the first woman in this office, I will not be the last,” she said. “Because every little girl watching tonight sees that this is a country of possibilities.”
Regarding Harris, Biden lauded that she is the “first daughter of immigrants ever elected in this country. Don’t tell me it’s not possible in the United States.”
Biden’s unifying tone follows a contentious campaign, one during which Trump consistently hammered him with personal attacks. 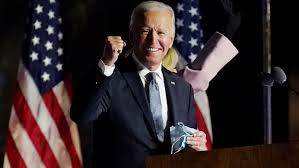 Almost all media houses has declared Biden and Vice President-elect Kamala Harris would defeat President Trump and Vice President Mike Pence, denying them a second term.
“The people of this nation have spoken. They delivered us a clear victory said Biden
A convincing victory. A victory for we the people,” “The most votes ever cast for a presidential ticket in the history of this nation.” Biden said.
Biden’s claim of victory, however, is not uncontested. In one tweet Saturday, despite the vote totals favoring Biden, Trump said “I WON THIS ELECTION, BY A LOT!”
Biden called the celebrations that broke out across the country Saturday “an outpouring of joy, hope, renewed faith that tomorrow will bring a better day.”
“I pledge to be a president who seeks not to divide but unify. Who doesn’t see red states and blue states, only sees the United States.”
To Trump supporters, he said: “I understand the disappointment tonight.
But now let’s give each other a chance. It’s time to put away the harsh rhetoric, lower the temperature… To make progress we have to stop treating our opponents as our enemies. They are not our enemies, they are Americans.”
The president-elect also said he wants the parties to begin “to cooperate with one another,” calling polarization between the parties “a choice.” 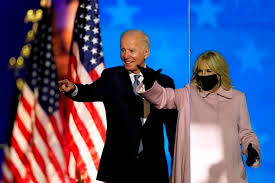 “If we can decide not to cooperate, then we can decide to cooperate,” Biden said, claiming cooperation as part of the “mandate” from his election.
“They want us to cooperate in their interest, and that’s the choice I’ll make.”
Also part of Biden’s mandate, he said, is to address the coronavirus crisis, an issue that defined the presidential campaign and which many say potentially led to his victory.
“Our work begins with getting COVID under control,” Biden said, noting his plan to announce a panel of coronavirus advisers for his transition team. He added that Americans will not be able to experience “all the moments that matter most to us until we get it under control.”
But Biden has been resistant to that, remaining steadfast in his opposition to things like banning fracking or eliminating private health insurance.
The Biden event Saturday night was drive-in style, like many of his campaign events have been. It comes after a day of general silence from the president, outside of a handful of tweets.
Trump has not yet conceded the race and is planning to pursue recounts and legal challenges in multiple states.
Biden will enter office on Jan. 20 at the head of a divided nation, after a year that included an impeachment trial for Trump, a pandemic that has killed over 200,000 people, race-related protests and riots and more.
He will also helm a Democratic Party in which many are calling for radical change and progressive agenda.

Share via President Donald Trump appeared to accept for the first time that Joe Biden had been elected the next president, tweeting Sunday that the Democrat “won because the Election was Rigged.”   On Friday, the Associated Press and networks called the outstanding states, leaving Biden with 306 Electoral College votes to 232 for Trump, Read More…

Share via US President Donald Trump has blamed China, Russia and India for adding to the global air pollution and asserted that his country America has the best environmental numbers.   Speaking to his cheering supporters at an elections rally in the key battleground State of North Carolina on Thursday, Trump said .,   “We Read More…

Share via The US has told various countries, including India, to cut oil imports from the Persian Gulf nation to “zero” by November 4 or face sanctions. India, which is the second biggest purchaser of Iranian oil after China, is willing to restrict its monthly purchase to 1.25 million tonnes or 15 million tonnes in Read More…