Skip to content
Share via
[splco_heading size=”15″ align=”left” margin=”30″]The National Investigation Agency (NIA) has arrested a former BJP party sarpanch from north Kashmir for allegedly supplying arms to the Hizbul terrorists in the DSP Davinder Singh case.[/splco_heading]
The National Investigation Agency (NIA) on Thursday arrested an alleged arms dealer, who unsuccessfully contested the 2014 assembly election on a BJP ticket, in connection with a case related to suspended Deputy Superintendent of Police Davinder Singh who was caught while ferrying terrorists outside the Kashmir valley.
The accused, identified as Tariq Mir, a resident of Maldoora of Shopian district in south Kashmir, was the fifth person arrested in the case which came to light when Singh was arrested along with three terrorists including a most wanted Hizbul Mujahideen commander in January this year.
Mir, who was elected as Sarpanch on a National Conference ticket, had contested the 2014 assembly elections in the erstwhile state from Wachi assembly seat in South Kashmir on a BJP ticket. He secured a little over 1,000 votes in the election.
[splco_spacer] 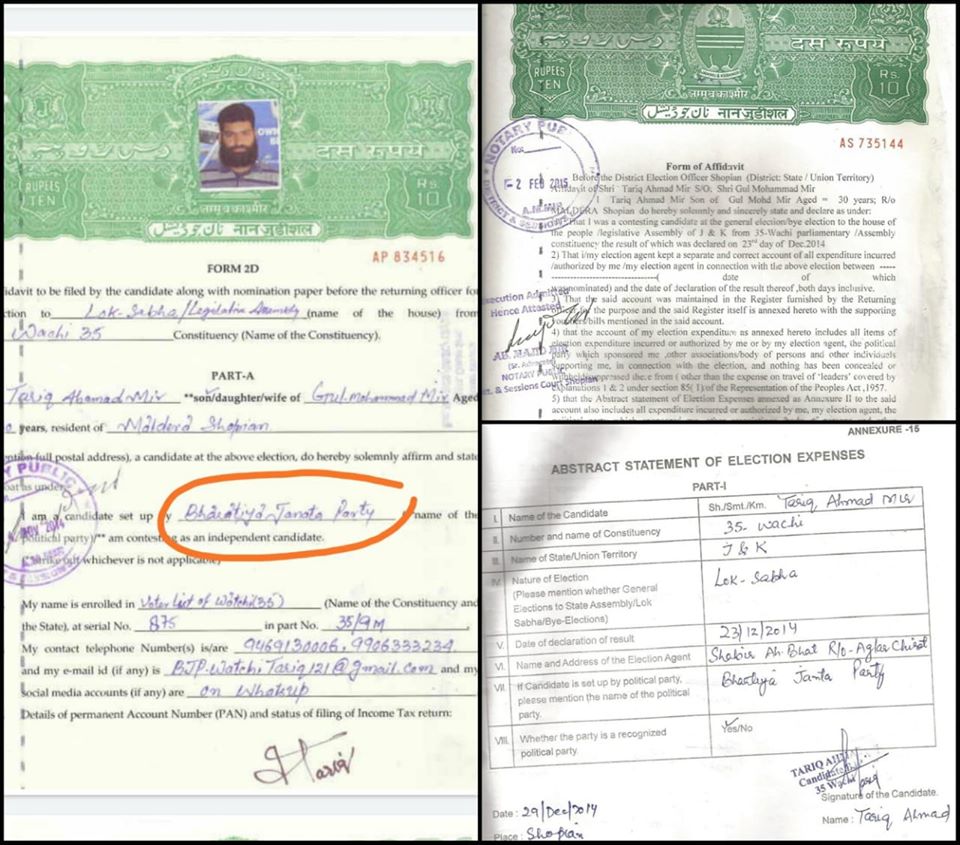 [splco_spacer]
Sources say Tariq Ahmad Mir a former sarpanch from north Kashmir’s Shopian district – was an arms conduit who provided logistic support and arms to Hizbul Mujahideen terrorist Naveed Babu.
Naveed Babu was arrested along with tainted DSP Davinder Singh on January 11, this year.
Also Read : 70 Days Prohibition On Mobiles And Internet In Kashmir Is Self Imposed Asks Katju
Mir has been arrested from his residence in Baramulla amid lockdown, the sources have said. He is being kept in a single cell, which has been sanitised for the Covid-19 virus.
“He was arrested from his village in Baramulla on Wednesday,” a top official in the NIA confirmed.

Share via In another Sexual allegations against BJP lawmakers a 22-year-old woman has filed a complaint in Bareilly accusing ruling BJP MLA Kushagra Sagar, 26, of raping her.   She has alleged Sagar sexually abused her from 2012 when she was a minor and 2014. Sagar, who is due to get married next month, had Read More…

Share via West Bengal government said on Sunday that it rejects the two borrowing options proposed by the Centre to meet the goods and services tax (GST) shortfall and will engage with other states to take collective steps.   “There will be conversations between states, probably on Monday itself.   We will see what the Read More…