Skip to content
Share via
The vehicle sales have come down in the last few months due to high tax rates and shadow banking crisis.
Following the pile-up of unsold inventory worth an estimated Rs 35,000 crore.,
The country’s top automakers Maruti Suzuki, Honda Cars, Mahindra, Hyundai, and Nissan among others have applied brakes on their production for some days in order to clear the piling inventory.
“There has been demand by the dealers across brands in the country to reduce the production as the sales are not happening,” according to industry sources
Even as many of the auto majors officially declined any plans to curb production, yet a regulatory filing by the country’s largest automaker Maruti Suzuki revealed a drop of 18.9% in its production during the month of May.
Centre Government lukewarm responses to the crisis in India’s non-banking financial sector has curbed the flow of funds to the needy buyer which led to slowdown in sales of many of the companies.

“Currently (June 2019), more than half a million passenger vehicles worth $5 billion (nearly Rs 35,000 crore) are lying unsold with dealerships at the beginning of June.

In the case of the two-wheeler segment, the number is as high as 3 million, valued approximately at about $2.5 billion (Rs 17,500 crore),” according to estimates provided by Care Ratings.

The high GST tax rates in the automobile sector also causing the slowdown in the demand for cars. 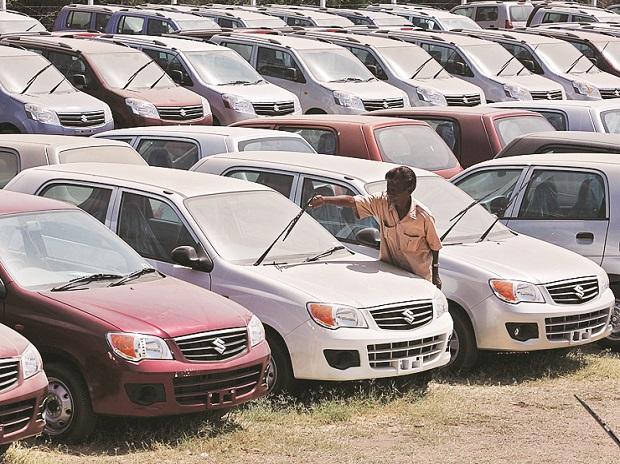 The smaller cars are taxed at 28% Goods and Services Tax, while larger ones are taxed at around 50%.
“The least the government can do is to reduce the taxes on cars by at least 10%, if not more,” Shekar Viswanathan, Vice Chairman, Toyota Kirloskar Motor said
A Honda Cars spokesperson attributed the reason for shutdown in production to Eid holiday, while many others said it was due to an annual maintenance.
There have been estimates of unsold inventories of about six to eight weeks with the carmakers across the board. “There is a slowdown in the demand.
Many of the OEMs are suspending production for a day or two to manage inventories… As I understand there is more than six to eight week of unsold inventory across the board,” said Kavan Mukhtyar, Partner and Leader, Automobiles, PwC India.
The auto sales in the country were also hit by the instability surrounding the elections. The analysts expect that the sales will pick up during the second and third quarters owing to a series of festivals, an auto analyst said.
There are apprehensions that the inventory stock-up in the build-up to the BS-VI might be playing heavy on the minds of automakers.
However, auto-analysts predict that slowdown in the production soon to give avalanche effect in other sectors in the days to come

Share via The collections from goods and services tax (GST) was projected to be Rs 12 trillion in the current financial year.   In other words, each month is expected to yield Rs 1 trillion from GST on an average. However, only two months — April and October — have so far hit the monthly Read More…

Kozhikode plane crash probe report yet to be placed with PSC

Share via Officials from the Civil Aviation Ministry informed the Parliamentary Standing Committee on Transport, Tourism, and Culture on Monday that probe is underway regarding the plane accident at Kozhikode airport and its final report will be placed before the panel, sources said.   The sources said that some members sought a report on the Read More…